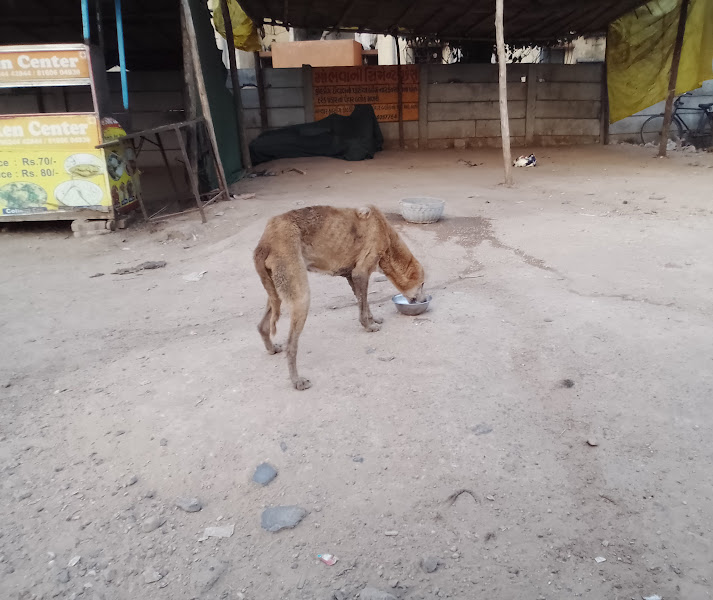 Bholi and Bada Kaan, two senior dogs, former a stray, latter an abandoned, walked into my life at a very crucial juncture. There had been three deaths at home since the beginning of the year; Tweeky, Ronaldo and Mallika, while Rapunzel was preparing me for the worst as well. She was 16+, I could not have expected miracles but yet I tried as a dutiful mother. It was on the 28th of March, on a return trip from the vet along with Rapunzel, I saw Bholi for the first time, on a side lane, distraught with the blistering forty-four degree Celsius heat. I was not familiar to the area or the location, but I fed her, ensured a water bowl with fresh water to be at her disposal, every day. The next day, I met Bada Kaan, who was elusive and mortally afraid of humans. The next couple of days, during a to and fro from the vet, I fed both of them in the evening hours.

By the first of April, I became symbolic of food for both of them and a human who would not shoo them away. I remember messaging a very close friend about not being sure how the things would pan out for Rapunzel, but I had the strength to face the worst, thanks to the entry of Bholi and Bada Kaan, who had seen much worse in life while all my children who had left had seen the best. However, a lot easier said than done, the next day, on my birthday eve, Rapunzel decided to leave and I was broken. By afternoon, Rapunzel left. Late in the afternoon, a tea vendor, who lived ten kilometres away, called to inform that White Collar, a stray dog, had collapsed on the roads. In two hours, I was at the vet with White Collar and together we came home after feeding Bholi and Bada Kaan in the evening. White Collar’s blood picture was good for his age, but he was almost blind. Ever since then he is a part of our home.

Since the vet visits had stopped, I wanted Bholi and Bada Kaan to be included in the morning round itself when our big family on the roads is tended to every day. But, Bada Kaan put my “I have the skill and the experience to trace the hideouts” to shame as even till today I do not know where he surfaces from. His clock was set for the evening, so, either of us, Maa or me, began to step out for him especially in the evening. Just a kilometer away was Bholi, so she too was included in the evening round. I became familiar with her behaviour, habits, in a week’s time. Come what may, she would never leave that space, even after food. Certain days if Bholi was asleep, I had to clap ten times to wake her up. She would walk confidently with her head down, like any gracefully aging lady would. Bholi and I soon found more company. In came two other resident female stray dogs; a white one with a black patch, named Jhimlee, she has glowing eyes and a brown fatso, named Kaddu. With their entry, Bholi became possessive about me. She was special. I always gave her the first bowl and she would finish her food to dart off to that of Jhimlee’s and Kaddu’s. Then she would boss around them. I assume that was her way of showing that she was superior to them and a lot closer to me than they both could fathom. Bholi began to put on weight. I was at peace only for it to be broken forever.

Bholi disappeared without any trace on the forty ninth day. As per the street vendors, there was no accident, no pick up van, no dead dog. We combed the area day and night, checked with shopkeepers, hawkers, sweepers. No one had seen Bholi, but I could sense Omerta because my intuition told me Bholi was alive. Bholi would never ever go on her own, she loved me and the food. Bholi was finally traced to a shelter that practices no kill but starve to death policy. Bholi is dead. A shopkeeper had placed the call for her pick up just because she was old.

I am not thinking about the sleepless nights I have had, the efforts, time and money put behind looking for Bholi, but the eighty odd hours that Bholi spent in that hell hole, in an unknown area, without food and water and would have waited for death to come to relieve her of the unnecessary misery she was put through. This is practically the story of every senior stray dog. A handful of stray dogs get to see old age and then they are sent to a shelter to die of loneliness and neglect. A shelter is not a five star resort but a jail. Can we let the senior stray dogs live in peace?

I had no magic potion to give Bholi more life. I just had love and care, that all our children on the streets receive, that could have added more life to the time she had, had it not been abruptly cut short. I am sorry, Bholi. I think of you every evening and every time I pass by your location. It hurts real bad.

Give animals a BRAKE reaches Trivandrum