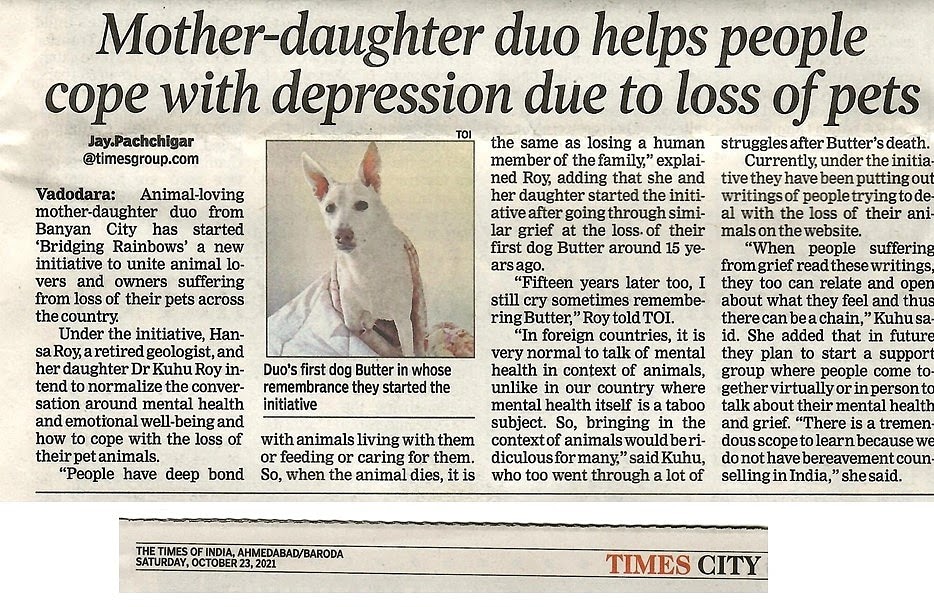 A two-month-old stray pup, named Butter, one among the three siblings, the other two fur balls named Scotch and Sundae, was found in a pool of blood after meeting with an accident.

Butter was rushed to the vet and thereafter brought home for recovery. It was the luckiest day of our life as a family, the fourteenth of October, 2006. Butter took the home by a storm as she bubbled with energy, zoomed across from one corner to the other, made bed sheets fly on the way, circled around the dining table with Edwina, the porcupine toy, clutched in her mouth. There was just no end to playing luki and pakdo-pakdo, games her Nani had taught, even at three in the morning. She was an explosive laden with happiness that burst every now and then. While Butter had an overflowing toy cupboard and a nose and an eye bank created out of it, she was protective about her turkey toy named Kukdukun.

When she first chewed up her teething ring, we got a hint of what was in store for us. Furniture with teeth imprints, coir mattresses strewn to layers and exploding pillows followed.

Spectacles turned to monocles and the unattended newspapers were shredded off in no time. Her antics reached a different level when a bucket, toilet cleaning brush, drain cover were found decorated on the bed. Then, it was the turn of the edibles. Diced cucumber and banana, shredded cauliflower and bed littered with tapioca pearls became a common sight. But, she had very little interest in her food, which she ate while listening to ‘Desi girl.’ But, she was perennially fascinated by the contents of the trash can. The mesmerising honey coloured eyes glittered with mischief when she kicked the laundered clothes off her recliner. Her short white whiskers and brown snout, emptied the cupboards in quest of undergarments. She also quietly stocked up on the lipsticks. People were drawn to her overly friendly nature and a charm that even swept away those who had never imagined falling in love with a dog, a Desi dog to be more precise. She was born for the camera, blessed with an innate talent to pose.

At school (read walks), she hurtled like an aimless missile and upon return, turned her back to have her hind legs massaged. We had an owner in Butter and she had a dog in the three of us. Butter grew up following human conversations very comfortably, which even led us to spell words at times. She took note of her surroundings with a keen eye for observation and her sniffing power made her trace and track the route of any living being, which made us refer to her as Detective Butter. The other side of Butter transformed her to a nurse dog if there was someone unwell at home. Infact, if not for Butter’s warning cues, we would have lost Guchguch to post cancer surgery complications. Guchguch and Butter went on to become partners in crime for life.

Butter was a very magnanimous soul. Every day she sniffed our clothes on return that smelled of countless like her who did not have the privilege of being homed, she always wagged tail with gratitude in her eyes. Returning home to Butter brought peace in a world that is as cruel to the people who care for the stray dogs. There was such a strong sense of hatred, that having created a rabies free zone and not letting a single stray dog in the locality multiply, only drew us brickbats. Compassion always comes with a heavy price tag and especially if one sticks with as much loyalty to the stray dogs. Since daily feeding is integral to maintaining the harmony between us and the stray dogs and to prevent the migration of sterilised dogs, threats to cow us down followed. When the abuse reached a threshold and we retaliated the legal way to protect our honour; character assassinations, social boycotts and public defamation with still evident consequences followed, a sad and sorry reflection of how the system and the society fails to protect people like us.

Butter, who had so much love to give, could not understand what she and us had done to have eyes stare at us with disdain and malice. The negativity affected her as she felt the hostility for us in the air. Then, one after the other, she saw her canine friends; Tuktuk, Brufus, Rheo, Tito, Zorina, Juhi and Khushi, suffer. From the overly friendly dog, she became sceptical of anyone coming her or our way, transforming to a guard dog. She restricted her goodness only for the very close friends and family she knew would not harm her and us. We trusted her instincts. Had it not been for Butter, we could not have survived an attempt of physical assault on us. The rescued became our rescuer.

Butter looked after our emotional well-being. Every time our heart had a reason to smile, a pain to share, a shoulder to cry, Butter was there, standing rock solid with us, giving the strength to sail through. She never let us succumb to harsh circumstances or the pain of deaths. She never came to lick our tears. Rather a scolding bark followed and since she had trained us so well, we knew the bark meant, “There is no time to grieve, go, step out and make a difference.”

When Butter left us (second of November, 2019) under the most unfortunate of circumstances, we, Guchguch included, did not know where to pick up life from, or whatever was left of it. Had Butter been there, she would have scolded us to stop grieving and work towards making the change.

That is when the need for a platform to open up, share our grief with empaths, draw courage and inspiration to move onto the stage of acceptance was direly felt. It had to be a place for all of us, who treat animals as equals and family, regardless of whether we lived with them under one roof or not, but whose lives change forever with their departure.

Chinki, over the rainbow bridge

Chinki, the new grand old lady of the house