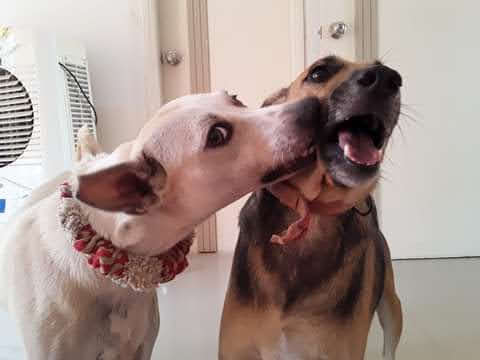 Chhutki and Ghoplu came home almost at the same time, the former in February 2016 when she was going to be killed for being an affectionate and playful pup and the latter in December 2015 when all his month old siblings were run down in one day and he was the only one left alive with his hind legs paralysed. Tweeky and Orange, the apparently ferocious stray dogs from Mumbai, went onto become the adoptive parents to these rescued orphan pups. While much of Ghoplu’s initial year was spent in recuperation with good food, supplements, ample sun exposure, Chhutki gave him company and often nudged him to get up and walk. Ghoplu eventually did and today he runs as good as his healthy counterparts. Paralysed dogs deserve as much a chance of homing. Chhutki and Ghoplu became partners in crime, the reason behind all the mayhem and mischief at home. They have reached middle age now and their friendship has grown stronger, one just cannot be imagined without the other. They were dutiful children to their adoptive parents until Tweeky and Orange departed and call it the circle of life, these two raised Zenobia, an orphan accident victim pup. That is the beauty of our home, none of these children are related to each other by blood but together they make the best family.