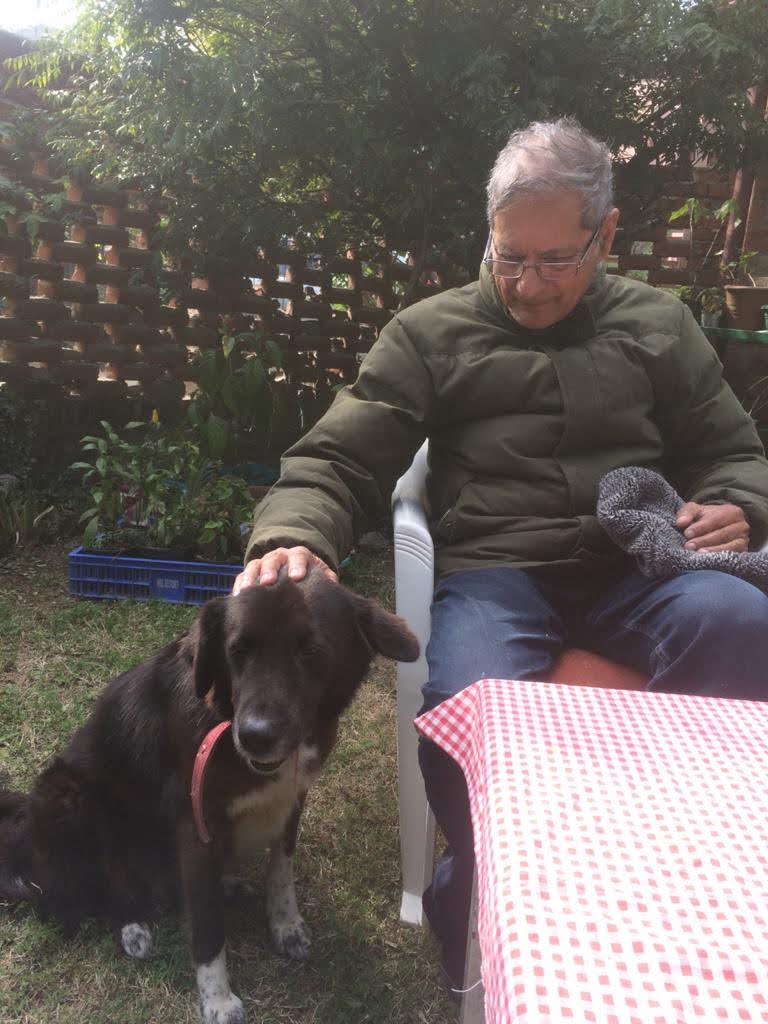 When I was asked to write for Bridging Rainbows, I could never imagine that it would have be about Pinky, who passed on in Ramgarh in Uttarakhand’s Nainital district on September 27 at the age of 14. She was a large, jet black Bhutia Gaddi with a white stomach and white paws, who perennially oozed affection. Her desire for being loved and petted was infinite. She would come and park herself by the side of even a visiting stranger and put her paws on him/her indicating that she wanted to be petted. She would do that repeatedly until the petting started and would resume doing it whenever it stopped.

The end came suddenly. She had slowed down a bit with age and could no longer leap over six-feet-high fences with ease. Nevertheless, she could still run fast, climb steep hill slopes with alacrity and descend as sure-footed as a mountain goat. And she had a good appetite. We were, therefore a bit surprised when her care-taker rang up on September 24 forenoon to say that Pinky seemed a bit unsteady on her feet and lacking in a sense of direction while being taken on her usual morning walk. We suspected that the cause could be some kind of neurological disorder or a stroke, and asked him to keep us briefed about how she was as the day progressed. The reports were encouraging. She had eaten as usual and was up and about.

Next morning, however, she was again unsteady on her feet, kept stumbling and seemed without a sense of direction. We could not rush to Ramgarh as I was not well besides having to put drops into one eye almost throughout the day as a part of a post-cataract surgery regimen. The vet whom she was taken the next day, could not help much; nor did medicines administered after intense consultations in Delhi on the basis of her symptoms.  Nothing– including the administration of medicines, oral re-hydration and nutrients through injection syringes with the needles taken off–seemed to work. We decided that my problems notwithstanding, we would leave for Ramgarh at the earliest.

Pinky left before we could start. As I heard the news of her departure, I remembered how she had arrived. She initially belonged to our cook’s father who lived a couple of kilometres down the road and received her rather incongruous name there. She adopted us when she was about a year old. To begin with, she would meet us halfway down our evening walk with our dogs, and follow us home. We had to escort her back as Ramgarh had—and has now–several leopards who were—and are–out on the prowl after sunset. We did not know what to do. She obviously wanted to live with us and yet we did not want to deprive our cook’s father of his pet.

An incident settled the issue. One night there was a sharp scratching sound on the door of our cook’s quarters at 2.30 a.m. That was Pinky wanting to come in. She stayed the night. The decision was taken in the morning: she had to be taken in as, otherwise, she would become leopard meal during one of her journeys to our house. Our cook’s father understood and Pinky became a part of our family along four other quadruped members—Zorba, Lara, and Bijli and Rusky.

Zorba, Lara and Bijli left for the hereafter in the months that followed. Mircha Prasad came in as a small puppy and turned out to be a biter as he grew up, putting his teeth into everybody except members of the immediate family and his caretakers, whom he invariably greeted with bursts of boisterous affection. As the number of his victims grew, we fenced off a part of our property where he romped around with Rusky who had to be kept from chasing monkeys into the nearby forest where leopards had made short work of a number of canines.

Pinky was generally out of the enclosure as she rarely ventured far from the house and, when she did, landed up at her old residence from where she was fetched. They were in their room by sunset. Until recently, they slept separately because we were in Ramgarh for relatively short stretches and did not bring them to Delhi. Used to the mild-to-cold climate of the hills, the crystalline air and blue sky, they were miserable in a flat and in the midst of the capital’s heat, traffic and pollution. Fortunately, our cook and her husband, who was the caretaker, loved animals and doted on the three. They took every possible care and made sure that they were safe from leopards, who posed a serious threat.

One evening around eight, our cook’s son and brother, who slept in the room next to the three to keep an eye on them, found a large member of the spotted species sitting in front of their locked room. They raised an alarm, their family and neighbours arrived making loud noises by beating steel plates with hammers. The leopard vanished but he/she or some other members of his/her species, continued to visit off and on at night. We have found pug marks on several occasions in our compound, including once right in front of the verandah where we eat breakfast. Working late in the night, I have sometimes heard shuffling noises made by a large animal moving right below my first-floor study’s window.

Our neighbours feared Mircha and were indifferent to Rusky, who was, and is, her own person. They loved Pinky because she was so effusively affectionate. She would visit them; they would pet and feed her biscuits. I will miss her continuous demand to be petted or sleeping on her mattress next to my bed at night or on a folded bedcover behind my computer chair while I worked. Goodbye Pinky, you will no longer have to suffer the sound of crackers during Diwali and will roam freely across eternity. See you on the other side.

Jukjuk, love redefined with the brightest star in the universe