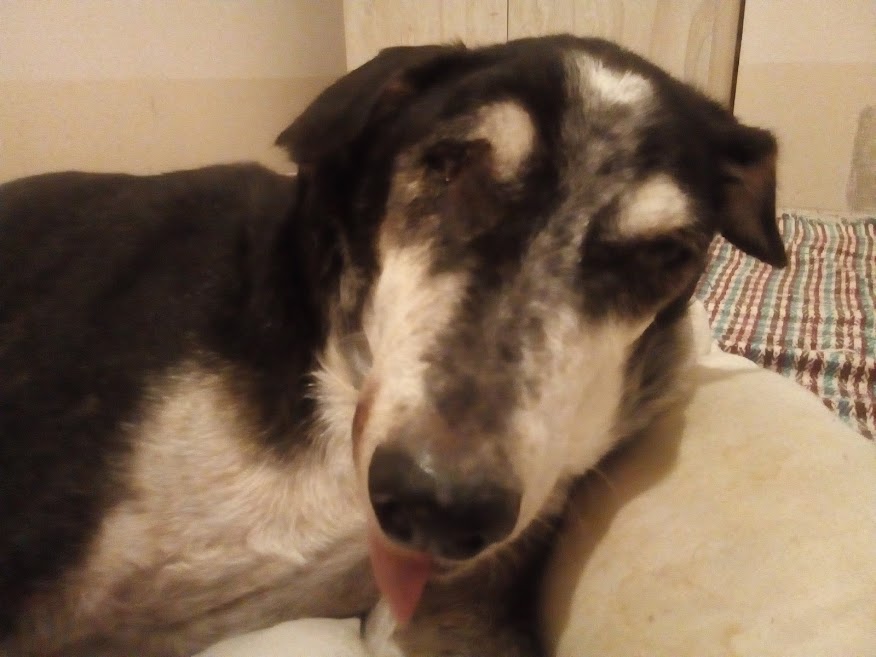 A one-eyed stray dog, a wrong drop off by someone, took close to a month to settle down on the streets with the Alisha gang. Under Maa’s care, who not only ensured food for him every day but also comforted him by talking to him as she does with all her children, Kaniya felt loved and wanted. Although he was a subordinate to Alisha and Mirchi, who often went to take bullying digs at him, he stole opportunities to give a nudge to Maa and sing her a song for the love he felt for her.

All was well for close to a year until one day, during the coronavirus lockdown, he crashed into Alisha and Langdu, unable to make sense of his food bowl. Having dealt with scores of blind dogs before, what we feared turned out to be true. His vision was all gone in the only eye he had. He was rescued and rushed to the vet. Kaniya had his vision partially restored after a human ophthalmologist and a vet successfully operated upon him. But there was no question of him going back to the streets.

On the 30th of July, 2020, covering a half an hour journey sitting on my lap with utmost faith, he entered our home to a roaring welcome by the other resident canines of the house.

While we took Kaniya to be meek, his personality flowered with homecoming. Although he had a soft bed, he snatched Tweeky’s and even went to beat him black and blue once. I had to rush to rescue Tweeky from the one-eyed Kaniya.

While Kaniya tried to boss over almost every canine at house, he was mortally afraid of Disco, a super senior bed ridden rescued stray and Chamgi, the furless, but with a hakunamatata approach towards life, dog.

For the way he confidently moves around the house, having calculated the number of steps he needs to take to his bed or move out in the open to take the sun, it doesn’t seem he has diminished vision in one eye and is all blind from the other.

It is his tongue sticking out during sleeping and a mild difficulty in eating that made us call the vet for a home visit. To our horror, it is during the health check we learned Kaniya did not have half his lower jaw!

We were shattered, but Kaniya was least affected with the disability he had. While we soaked food for him so that he could munch it easily, Kaniya, on the other hand, blackmailed us if we did not give him biscuits to chew during the snack time. Infact, Kaniya is now a chubby dog with muscles.

Dogs like Kaniya aren’t the ones with special needs but they definitely need to be treated special because they are as equal. Kaniya has given our home a vision to live. He inspired us to home another blind senior stray dog named Dixa Babu.

When we sit together holding hands every evening, Kaniya hums to me the same song he did for Maa while he lived on the roads and it goes like a prayer from the two of us for all the seniors strays and dogs with special needs to be happily homed as our dear Kaniya is.