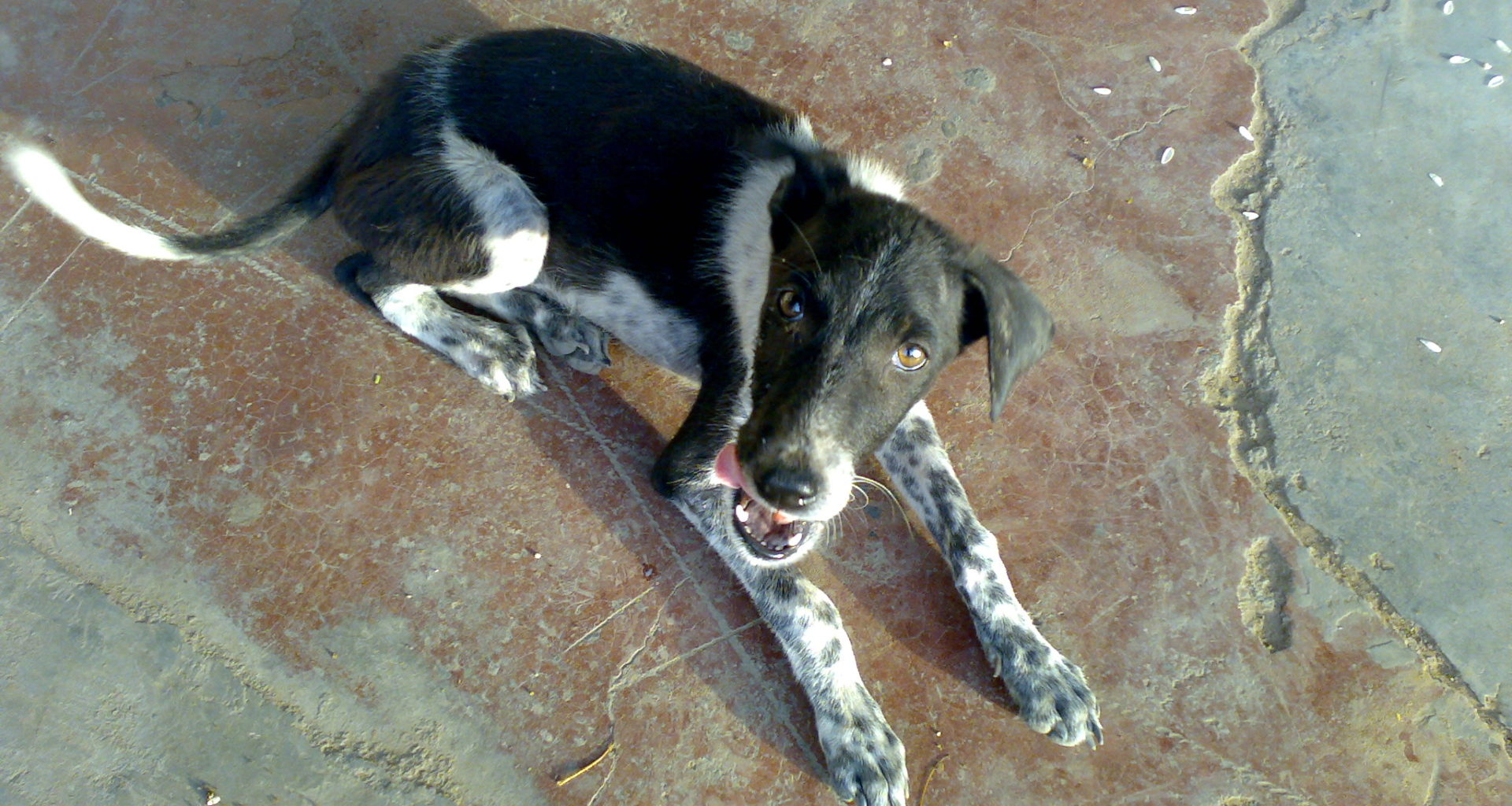 Home Harry, the fourteen plus years that flew by
ffond remembrance

Harry, the fourteen plus years that flew by

It was a May 2007 afternoon. Maa and me were on our return route from shopping. At a busy traffic intersection where we came to a halt for the red lights, my eyes fell on a scrawny two months old pup, all black with certain patches of white, who was licking an empty plastic tea cup. The lights turned green and we stopped by at a distance from the pup. I walked down towards the pup with a packet of biscuits, that is I had at that point. On approach, the frail pup began to wag his thin tail in anticipation. He had a beautiful white tilak on his forehead. He was terribly hungry as he munched off the biscuits in no time. “I will come to meet you tomorrow onwards, do wait for me,” I said, after extending my hand to pet him. He loved the small petting session. I bid him a bye with the hope to meet again.

The following afternoon, at around same time, I left home to meet the pup. Right at the junction I had met him the previous day, instead of rummaging, he was staring at the traffic. We both kept our promise to each other. His face turned hopeful as he saw me approach. He galloped and reached me at double the speed. A belch after having a wholesome meal, he nudged me with his paw. I turned into his play mate. He ran a short lap and returned to me, and my job was to catch him. The play session lasted for half an hour. Needless to say, it became a daily affair; the wait, the food and the play time. The pup got named Harry.

Infact, it is during one of those play sessions that Harry’s teeth accidentally punctured my skin. He was less than three months old then. I went back home, cleaned the wound with an anti-septic and took a tetanus shot and not a rabies shot. This is so because dogs aged less than three months cannot carry the rabies strain; two, you are supposed to take a rabies shot only if you suspect the dog was rabid, three; accidental scratching during play time does not cause rabies and above all, Harry was already vaccinated against rabies.

Because stray dogs are mostly seen in a negative light by the public (most are brought up and brain washed and the earliest lessons of life are based on hating and hitting them), Harry and my bond gradually started to catch the attention of the passers by; those in the GEB office, a small boutique beside the intersection and that of the traffic police. Our play time post food became not a matter of amusement, but of understanding how sacred the relationship is between a human and a stray dog. Harry voiced what hundreds and thousands of stray dogs want to; that, even though they maybe on the roads, they will continue to be our forever best friends. So, one day, when I got a bit delayed, Harry was seen having tea with a traffic police official. Soon, he had a new name, ‘Raju,’ as given by the GEB officials, whose heart Harry had won in no time.

A couple of months down the line, a heavy downpour left most of Baroda inundated. Wading through waters, I finally found a rickshaw that was willing to take me to Harry’s location. It took half an hour to reach his spot, unlike the ten minutes drive it was on any normal day. Harry, was waiting for me at an elevated spot. He knew, there wouldn’t go a day that he would have to go hungry ever.

Soon walked in, a chirpy, orange furred and kohl eyed, an almost adult, female dog who once saw Harry and me together. For her fun-loving attitude, she got named Sweety, for the sweetness her presence brought. She started to join in during the meal times and Harry found a play mate of his species, while I became the back up if Sweety was not around. Our pack started to grow in size. That is the point from which Maa took over. Day after day, year after year, she combed a five square kilometer area, that led to the spaying and neutering of about more than hundred stray dogs and even became a rabies free zone. If not for the meeting with Harry, none of this could have been achieved.

We started to meet less often as Maa met him daily. For obvious reasons, he became closer to Maa, as she was the one who fed him and gave him all the love, even on my behalf. So, one day when I took out time to meet him, yes, he did come to me wagging his tail, but he did not want to play. He had grown up and so had Sweety. Together, they went for their spay and neuter surgery and returned back to their place in a week’s time, all healed.

Upon return, Sweety played with Harry and more mischief prevailed, she also disciplined him and took bullying digs at him for fun. It was only a matter of time that Sweety had to find someone of her age. Walked Gadha Prasad in her life as a devoted, but hen pecked soulmate. The love was to the extent that he would let Sweety polish of his bowl too. However, it was one sided in nature as Sweety fell for Jr. Prashant, a handsome, stout black dog.

The new power couple on the block were a delight to watch as they went about bossing around the area. They never took along Harry. So, he found a new entertainment for himself, an autorickshaw ride. Once done with the food, he climbed onto the footrest. As the auto started, he loved the breeze that touched his face. The traffic looked in awe and smiled at the dog who loved to take the auto ride, and did not need any collar or leash. A round later, when he got down, Sweety and Jr. Prashant always chased him. Harry bolted off over the horizon to save himself from bashing.

In the coming years, they all began to age gracefully, from the once hyperactive pack they were, to a quiet one. Then, one day, when Sweety was taking refuge under a car from the sweltering heat, she was run down. The lady who understood the sin she had conducted, offered money in return to those who came to protest the blood curdling cold murder of Sweety, due to complete apathy. If money was ever a substitute to a precious life lost. Harry and Jr. Prashant were left distraught with Sweety’s untimely death, just like us.

While all of our dogs on the roads were aging, Harry was the one I was never really worried about. He did not let age reflect on him and he was far more fit for being a fourteen year old.

On the night of 19th November and the early morning of 20th, Harry ventured out, God knows for what reason. Maybe, he always used to. On the morning of the 20th, he was found badly injured. He was howling for the gruesome wounds he had sustained. Maa, who had an appointment with the doctor, requested the clinic of a private vet for Harry’s pick up, as he needed medical attention at the earliest.

Harry left on the 21st of November, 2021. Infact, Maa had received the news in the morning itself but she did not tell me as I would be disturbed and was neck deep in work. When she did, after lunch, I was numb. How could Harry die? He was a constant for fourteen plus years, a landmark of the area and a dog who held a more than special place in Maa and my heart.

I went for his burial. The dog who used to be my play mate once, lay still and cold. I sat by his side and petted him, while his grave was being dug. Where did the fourteen years go? With him, an era comes to an end. Jr. Prashant and White (a new female, already spayed, who came to occupy the space after Sweety) left food, maybe as a mark of respect for their beloved friend who had left for the rainbow bridge. Sweety must be happy to have Harry back. As for the two of us, his memories and the impact he had on our lives is all we are left with. Life goes on, but the pain remains. Until we meet again…

Bhaalu, the senior dog who loved playing with toys