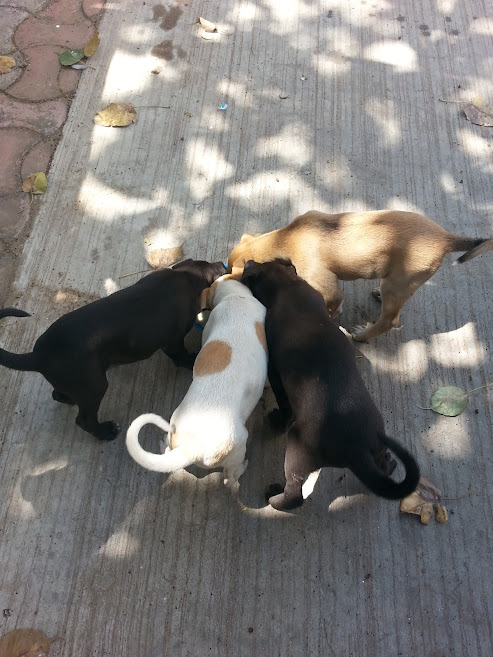 A Tale of Three Survivor Siblings

A stray mother dog, who was only inclined to hunt pigeons, was traced by Maa in January, 2014. Named Mirchi later on, she raised her litter of five on a pigeon diet and the dog food, buttermilk we gave was of their little interest, they ate it just to keep our heart. People around were at their kindest and protective as the pups were overtly cute.

However, the love simply disappeared when the then grown up pups (Ronaldo, Natasha, Alisha and Bipasha) and their mother returned from their spay/neuter surgery (returning the strays to their original location is integral to put a hold on migration, achieve population stabilisation that also helps to put a check on rabies).

Having lived all of their little life of about eight months under immense protection, they were suddenly exposed to traffic and hostile people. They were shooed away on the night of the return itself. Bipasha became the earliest victim of reckless driving that night.

Alisha ended up with an injured tail and two gruesome fractures.

Then, it was the turn of Ronaldo, who was dragged under the wheels for half a kilometre by a lady who was chatting on the phone, all deaf to his screams. Good Samaritans pulled Ronaldo out but much damage had been done by then. He underwent two botchy surgeries by a novice insensitive vet and later on, an expert surgeon, Dr. Angela Lobo, saved Ronaldo’s life by operating upon him for the third time.

A month down the line (November, 2014), when I was on my way to Baroda from Mumbai with Georgina, Jalebi, Tweeky, Orange and Raju, I was informed by Maa that Natasha too had met with a brutal accident. Natasha was barely able to get up as all her limbs had gruesome injuries. After she underwent a successful amputation surgery performed by Dr. Angela Lobo, Natasha refused to get up for two months. X-rays revealed her spine was all good. Thereon, began the attempts to pump up her spirits to be up on her three limbs. In that time period, Natasha and I did all we could to learn to walk again, together, me holding her like a mother does her child. We even fell down together several times, but we chose to laugh off our pain. When she finally got up on her three limbs, tears of joy followed and there has been no stopping Natasha since then.

Ronaldo, infact, led the SOCLEEN rally on his three legs.

A very instrumental role in the recovery of Ronaldo and Natasha was played by Wonder, an adopted Desi dog by a family friend, who kept their morale high and never judged that they had a missing limb. Wonder became their best friend for life, infact, the trio set the house on fire every time he came visiting, and the three black beauties ran aimlessly around the house, paying no heed to Georgina’s anger.

Ronaldo and Natasha, the sibling duo – accident survivors on three legs, who adopted our home, are more able and energetic about life than their four-legged counterparts are and they symbolise hope in the darkest of hours. It is the spirit of life that matters, and not the number of limbs.

Ronaldo is a hero. In October 2017, he defended and protected his home from a six feet long cobra snake that was about to enter our/his home. He alerted us. If not for him, anything could have happened had the snake come inside.

As for Alisha, she continues to spread joy on the roads with her infectious smile, despite the many injuries she has sustained and survived during her eight years of life.