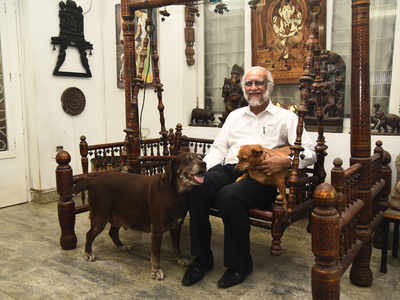 Honey, the most wonderful companion

On September 28, 2018, I saw a msg on FaceBook that one Aditi Madusudhan had found two dogs on the East Coast Road abandoned by a breeder. One was a four year old Retriever and the other was a ten and a half year old chocolate lab. Both were thrown out because they were not getting pregnant. She had placed them in a commercial kennel paying about Rs.400 per day and was looking for someone to adopt them. I sent her a message that I would foster them till she found a good home and she could use the money she was paying the kennel for other rescues.

The next day, she brought them over – the retriever had been named Lakshmi by her and the lab was Honey and, in the one month in the kennels, they had learnt to respond to their names. While Lakshmi was a calm and super friendly girl, Honey was on the verge of a nervous breakdown. We fell in love with them and were unable to find anyone who would take them both together since we did not want to separate them.

Honey soon became very well adjusted and responded to our overtures. Lakshmi was assessed as a candidate for our pet therapy programme – Dr. Dog – and passed with flying colours and Dr Lakshmi was “employed” in the Saraswathi Kendra Learning Centre (for special kids) where she worked with children on the dyslexic and autistic spectrum. Like with the earlier Dr. Dogs, she was remarkably successful. She died of rare tick fever infection almost exactly two years ago.

Honey had a small mammary tumour when we got her and had a bit of trouble defecating, was developing cataracts, and slowly began to lose her hearing.  In my 77 years of living with cats and dogs (the last 47 with dogs since my wife, Nanditha, is allergic to cat hair, I have never known a dog like her. She got along with all our rescues – over a dozen – and during the lockdowns, was the most wonderful companion one could have asked for. She was like Mary’s little lamb and would tag along at my heels at home. When I left for my office around nine, she would accompany me to the gate and sit there till my wife left for her office (in the same compound) where she stayed, till about four when she would go home for her meal and then return to the gate and wait for me till I returned home from my office around 6. Even if it was raining, she would be there. Of course, like most labs, she did not mind getting wet.

Today it is a week but I cannot stop thinking of her and missing her. We have nine others at home and seven in my office, but …

The author is Chairman Emeritus & co-founder Blue Cross of India

Lighting up Hope this Diwali