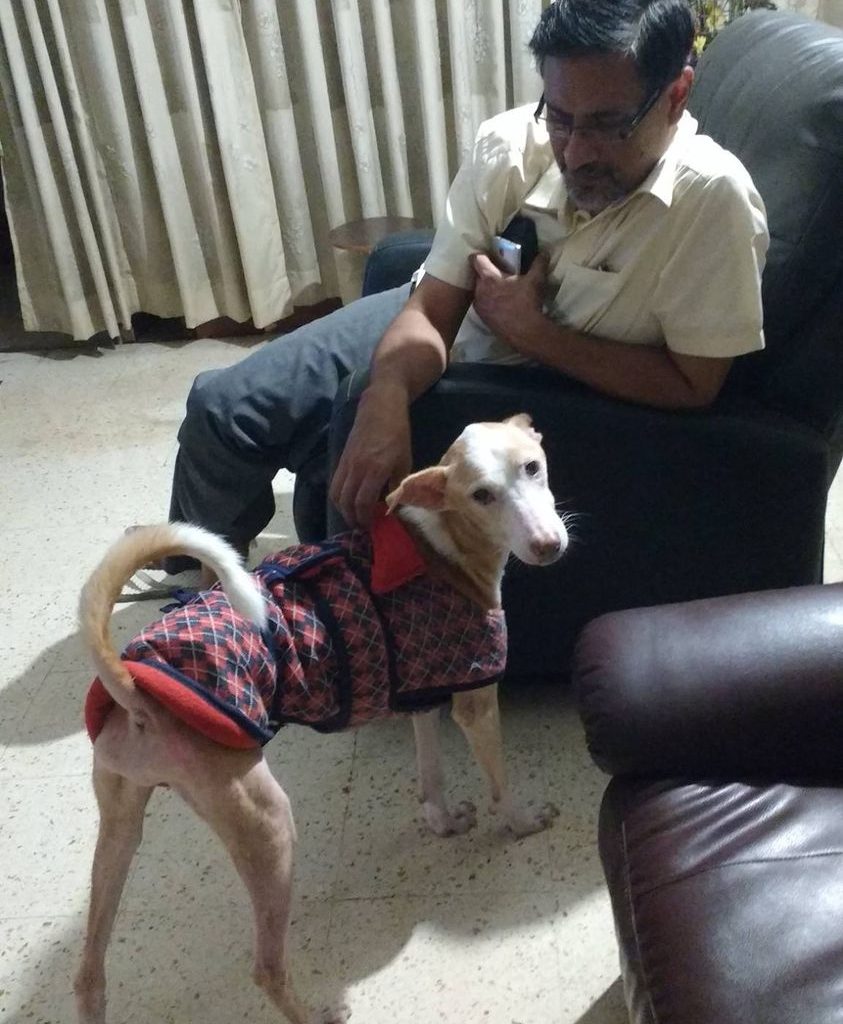 It was raining very heavily, incessantly for days together in July-August in Mumbai 2006. A Black Indian skinny mother dog, tired, completely drenched was moving around the car park of a multi-storeyed apartment in Central Mumbai where I had just moved in. Kuhu, our daughter spotted her as well her litter which comprised all black coloured puppies and a fawn-white one. The quirk of fate took the lives of all the puppies excepting one, within a few days of birth. It was the fawn-white one which beat the odds. He was christened Jelebi due to a curly tail resembling the over indulged Indian sweet. Feeding of the mother dog begun. Milk, biscuits, chicken bones, rice, dal and any left overs that were there. Soon three other dogs entered the surroundings and soon it was a pack of five. (Georgina/Kaalu) the mother dog, Jelebi, Tweaky, Orange, and a spotted white one. At night, I used to come down to the ground floor / basement to feed them. Kuhu oriented me to it. This continued for 7 years from July/Aug 2006-May2013. I left Mumbai in end of May 2013 for a new job assignment elsewhere. Sometime in 2014, Kuhu brought the first four named to Baroda. The fifth one had disappeared (thanks to some agency who took it for sterilization and conveniently left it somewhere) and left me very saddened.

Now, Jelebi. Jelebi was very friendly, cool and very loving. It had a pink nose resembling a pig and I often called him Jelebi the pig. At meal times, any food wasted or not had by others was polished off by Jelebi just like that. Any left over extra milk and Jelebi would do the honours. He would nudge me with his nose to express hello whenever we met. He slept in front of the apartment complex and in sleep, looked like an innocent child. Jelebi was the favourite of the liftman, watchman and all the children of the building, who called him “Jijo”. At one time Jelebi had turned stout and muscular. Both Jelebi and Georgina would escort me to the gate of the Housing complex whenever I walked there. At the gate both mother and son would engage in territorial battles with dogs on the other side, in which Georgina would beat the shit of others. Jelebi would often suffer in these misadventures. During Diwali time, Jelebi would disappear for a month to avoid the sound of the crackers. Where he hid then, is still a mystery to me. Jelebi loved to go after the crows but miserably failed in his crow catching endeavours and would return with a” bhola” face each time.

An Italian lady, who was staying the same building indulged Jelebi a lot. A time came when she, along with her husband were leaving India and one evening around that time, she was seen holding Jelebi and crying out loudly. Jelebi was wondering, what the fuss was all about. I told her not to worry, as I would look after him and feed him. In the midst of her tears she wailed in broken English, “you a very good man”. I was left wondering when I received such a good compliment earlier.

When Jelebi and others arrived in Baroda in 2014, he was all bones and a pale shadow of his former self. Medical investigations suggested of some foreign object in his stomach. He could not be operated due his fragile condition. For four years (2014-2018), he often fell ill, often very seriously to doubt his recovery, but yet, did spring back each time like a phoenix. Such was his zest for life. He was fighter to the core whose yearning for life beat all odds. Each time it was a miracle. Each time again, there was Kuhu, who rallied around him more than god, and our Vet, Dr Sandeep who was fantastic in helping him to survive. At Mumbai, Jelebi used to sleep on a rubber rug with protruding rubber spines very comfortably. At Baroda, he would cosy up only with a pillow, and we wondered how he used to sleep on that carpet of rubber nails in Mumbai. At Baroda, Jelebi and myself used to engage in a conversation which started with a strange ” draew ” sound from his side to which I responded. Only we could follow the language.

On the fateful night of departure of Jelebi, Kuhu’s friend Paromita and her brother helped immensely by taking Jelebi to the Vet in the middle of the night. Blessings and all good wishes to them. With the call of the almighty, Jelebi left, leaving a void. The pain is as strong as the one felt with departure of Jimmy and Alsi, the first two pets at our home in late 1970’s – early 1980’s. A gentle , innocent, loving dog , full of life, is relieved of all the pain and sufferings of the last few years. As one grapples with the question as to why these lovely creatures, who offer unconditional love, suffer so much miseries in this world, life goes on.

Pawprints on the sands of time