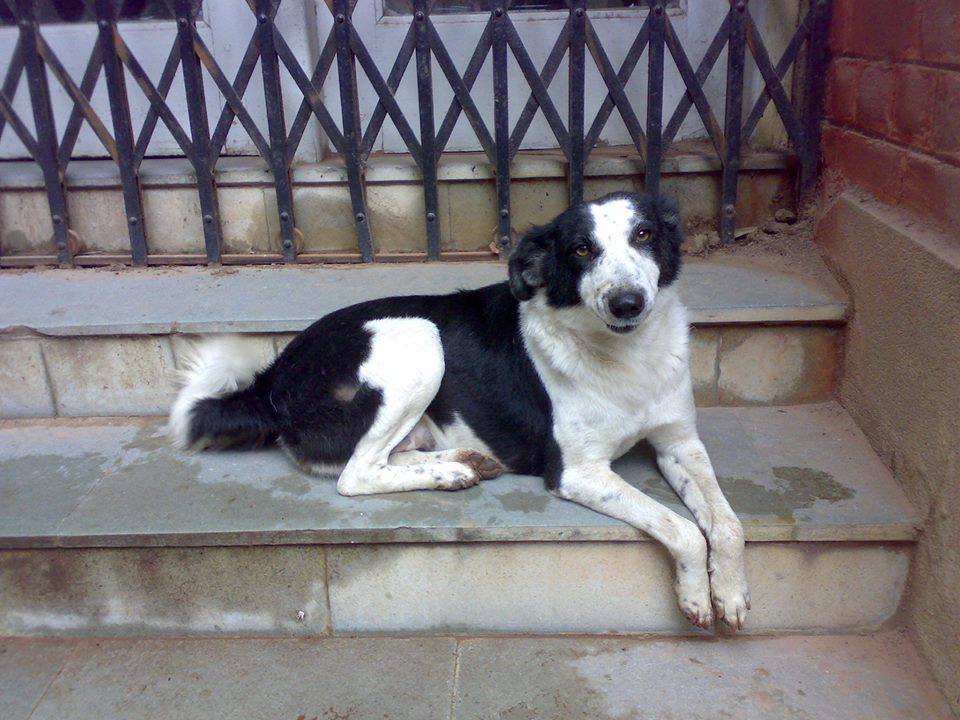 Home Jukjuk, love redefined with the brightest star in the universe
ffond remembrance

Jukjuk, love redefined with the brightest star in the universe

Love of the most unique kind happens only once in a lifetime. For me, that was with Jukjuk, a month old, long furred black and white pup, born to Goshi, in the year 2005. Goshi had already delivered by the time I had entered college. So, I fed her everyday and then one fine day she brought along eight of her pups, one among them, I had little idea then, was the love of my life, Jukjuk. She was the runt of the litter. She would keep watching me from the stairs with her soulful eyes, but was not allowed to come near me, on orders of Guchguch, her bossy brother. I yearned as much to spend time with her and every time I made an attempt, Guchguch appeared out of nowhere to put all my plans to drain.

Jukjuk was barely three months old when a bike ran over her face. She ended up with a twisted jaw. For her medications and food, I had to meet her several times in a day. So, stealing time in between breaks, classes, lunch hour, before leaving from college, is how I started meeting up with her often. To escape Guchguch, I had to take the route to move hiding behind bushes. It is in those moments we began to bond.

It took close to a month for her to recover completely, but that twisted jaw was always to remain. In that time period, I earned myself a soulmate for a lifetime. Jukjuk made a point to attend classes with me. We even sat to write exams together. So when I had earned a gold medal, I shared it with Jukjuk.

Once the classes would get over, we would sit in the lawn holding hands and paws. We did not need anyone else in the world when we had each other. Maybe that is what completeness means, which I found in Jukjuk. What Butter was at home, was Jukjuk at college; the only major difference, I was like a nanny to Butter while Jukjuk behaved like a dog to me. College meant Jukjuk. All the other campus dogs; Bhaalu, Goshi, Rani, Tuki and Guchguch would leave me and go after a certain point, but Jukjuk would just not leave my side. She ensured to see me off every single day.

I do not know what had I done to earn so much of love from her. If there was a barometer of blind love, she would be at the top of it. She knew all the routes I undertook to enter the college, even the secret one from behind the bushes.

Jukjuk lost her appetite on the 1st of October, 2013 and was rushed to the vet as she was not herself. Turned out, she had a venereal tumour. But it was curable and her treatment began immediately so I was relieved.

However, I remember Jukjuk taking a walk down the corridor on the 3rd of October, 2013, with her head down and I had intentionally avoided her and taken a different route to enter. I curse myself for that.

The same evening, I left for Mumbai. It was one of my planned in advance monthly trips to check on Georgina, Jalebi, Tweeky and Orange where the struggle to keep them safe had become a daily headache for me. Every month, for two days, I stayed with them, played with them and left during the night to be at a friend’s place who not only offered me shelter but food too.

In my absence, Jukjuk disappeared for a day while Maa and once upon a time best friend searched for her everywhere. I couldn’t sleep that night. Had I made a wrong decision to come over to Mumbai? I had no other option but to check on their well being as Georgina and others were being repeatedly targeted by residents, and not even one animal lover was by their side, while countless existed on social media from their region.

The next morning, Maa found Jukjuk. She said she was at the stairs, as usual waiting for me. But she was not good. Maa rushed her to the vet, a different one because she feared a misdiagnosis. Georgina kept nudging me with her paw able to sense I was stressed, I bid them bye with the hope to find them safe the next month. Georgina ran behind my taxi and I cried.

As soon as the flight landed in Baroda, my phone had several missed calls. They were from Maa. My heart sank as I heard her choked up voice on phone asking me to come over directly at the new vet to meet Jukjuk. I rushed home, kept luggage, hugged Butter and left for the clinic.

As I stepped inside, there was Maa, with red swollen eyes and Jukjuk, almost lifeless at the table. I sang her favourite lullaby. With painful eyes, she wagged her bushy tail for one last time. It is then Maa said, her creatinine was 17. I chill went down my spine. “She needs to go, Maa.” Maa hid her face and cried, I was just in too much shock to absorb any of the reality. Yet, to be double sure. I went to the vet and asked, “Can she have one of my kidneys?” The vet began laughing. “Does she hold any chance otherwise?”, “No, she will die on her own in sometime.” “In which case, she has to go.” “I am getting late now as it is time to close down. Get her tomorrow if she is alive.” I don’t know what I was more shocked with, Jukjuk’s condition or the vet’s apathy.

I took her on my lap and we left the clinic. Jukjuk kept staring into my eyes, moaning occasionally. I dropped Maa home on the way, she hugged Jukjuk and cried once again.

I started on my journey to a shelter that had agreed to board Jukjuk for the night. All throughout the journey I kept murmuring to her, “I love you madly.” When we reached the shelter, I placed her in one cabin. I patted her, kissed her on the forehead and left. It is on the return journey, I howled with the reality sinking in that maybe it was the last time we were together.

I reached home and closed myself, even to Butter. There was no sleep. The next morning around 8am the call came Jukjuk had died at night, the 7th of October, 2013.

We went for her burial. I lifted the stone heavy stiff body of Jukjuk, and placed her in the very earth she had come from. Maa held onto me tightly. But I was not able to feel anything.

In the subsequent days, all I did was cry and yearn for Jukjuk. The questions, why did I avoid her in the corridor on the 3rd October?, why did I leave for Mumbai? Why did I leave her at a shelter to die?, came to eat me. Friends were kind. They called and offered to drop in. But none of that was going to get Jukjuk back to me. When I look back, it was depression, just that I was not aware of it.

Going to college became difficult. It meant, no one to accompany me to classes, no one to hold hands and sit together. But I had to, there is nothing like animal soulmate bereavement leave here. I stepped inside my doctoral guide’s room with swollen puffy eyes. She knew the mess I was in. I told her how I was struggling. Her words were, “I lost members of my family this year. I know how it feels.” She accorded the same respect to my and Jukjuk’s bond, with her human to human bond. It is then I cried infront of her, for being so kind to respect the relationship I had with Jukjuk.

I had the best daughter in Jukjuk while she had the worst mother in me. It is often said that time heals wounds, mine haven’t, at all. Today, exactly eight years later, the pain is as gruesome as it then was and the wound still as raw and the yearning to be with Jukjuk as strong as ever. Her untimely death weighs me down every single day because there has been no healing. I choke up at her thought and mention and the guilt with which I live because I failed to save her and left her to die at a shelter.

Until we meet again, I look at the brightest star every night, knowing very well that only my child, the love of my life, Jukjuk can shine that bright.

Butter on her home-coming, 15 years ago!