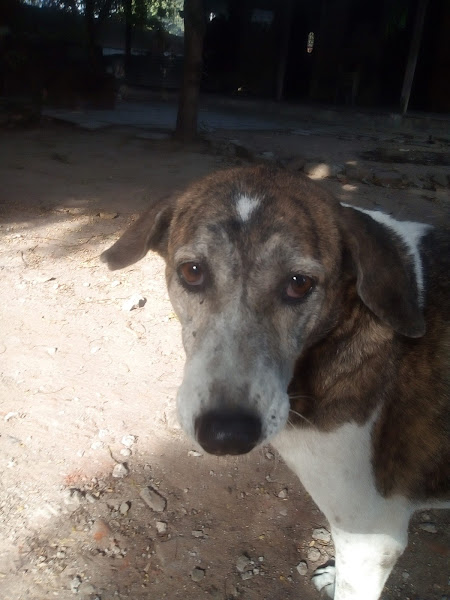 When Rangoli Kaali had come under Maa’s care in 2010, she was a lactating stray dog. One among her pups was Kaabri, a brindle coloured female dog with white chest and legs. Her most beautiful trait was her soulful eyes and her happy go lucky attitude. She was that one dog who would mingle with everyone; humans and dogs alike. Maa or me never saw her pick up a fight with anyone ever.

Kaabri (the only surviving pup from the litter) and her mother were later on sent for spaying to put an end to a cycle of physical, emotional and nutritional drain for once and for all. Just when we were happy that Rangoli Kaali would finally get to live for herself (she appeared to be a middle aged dog who must have delivered a lot many litters in the past) a tragedy struck. The driver of the animal birth control agency, post surgery, dropped off Rangoli Kaali at a wrong location. She was never found again despite repeated search. Our heart sinks thinking what must have happened to her.

Kaabri was disoriented after losing her mother. They could have happily lived together, had her mother not been wrongly dropped off by the driver. However, she picked up life once again and migrated to an adjacent location that was being ruled by our Margaret, the blood donor HERO DOG.

Kaabri happily became the omega of the pack. She tried her level best to keep everyone happy; Margaret, her boss, Saffron, her boss’s best friend and Sundae, her friend. She would accompany them for strolls and be the best night guard. Post spaying, she became a chubby dog, not only because she was fed every single day by Maa, but because spaying improves the health of the dogs. When she came running, it appeared like a drum rolling our way, who burst with goodness that she had to spread.

With time, Margaret and Saffron left, so did the caretaker family of the Government property where they used to reside. Sundae and Kaabri were the only two souls left in a once lively place. While Maa met and fed the duo in the morning, I did in the evening. Despite the perceptible loneliness, Kaabri kept her and Sundae’s spirits high. She was symbolic of hope even when things were not bright.

She was a foodie. There would not go a day when she would refuse to eat or leave food. However, that was not the case on the 22nd of January, 2020 when I reached in the evening. Sundae came galloping, but Kaabri was nowhere to be seen. I clapped hard and she appeared two minutes later. She came and nudged me, looked at me with bloodshot eyes and ran away. What was that supposed to mean? I shouted, “Kaabri, don’t you want to have your food today?” She did not stop and disappeared. Maybe she wanted to fast. Many dogs do that every once in a while to detoxify their system. But Kaabri never fasted. Maybe that day was an exception.

The following morning, 23rd of January, 2020, Maa did not find Kaabri. Something was definitely wrong. Two hours later, I reached her location. Sundae was not herself, she appeared to be afraid and lost out. It only added to my fear. I started asking around. School children! I asked them, “Have you seen the fat dog who used to be here all the time?” “Yes, she is dead.” “What?” My pulse shot up. “But, how?” “We do not know. When we came in the morning, she was dead.” “Where is she?” “Behind that building,” said the child as he pointed the finger towards the building that was stones throw. My heart raced. I wanted the child to be wrong. He wasn’t. There was Kaabri, lying still, with no life and mouth and body covered with ants. I burst into a howl. An untimely death of a lively and a healthy soul was gut wrenching. With shaking hands, I called Maa and updated her. As she too sobbed on the phone both of us know what was to be done next, bring Sundae home to safety.

When we pass by those locations, we see the pack of four, their caretakers as flashes of memory of years together flood us.

Chinki, the new grand old lady of the house

Chinki, over the rainbow bridge