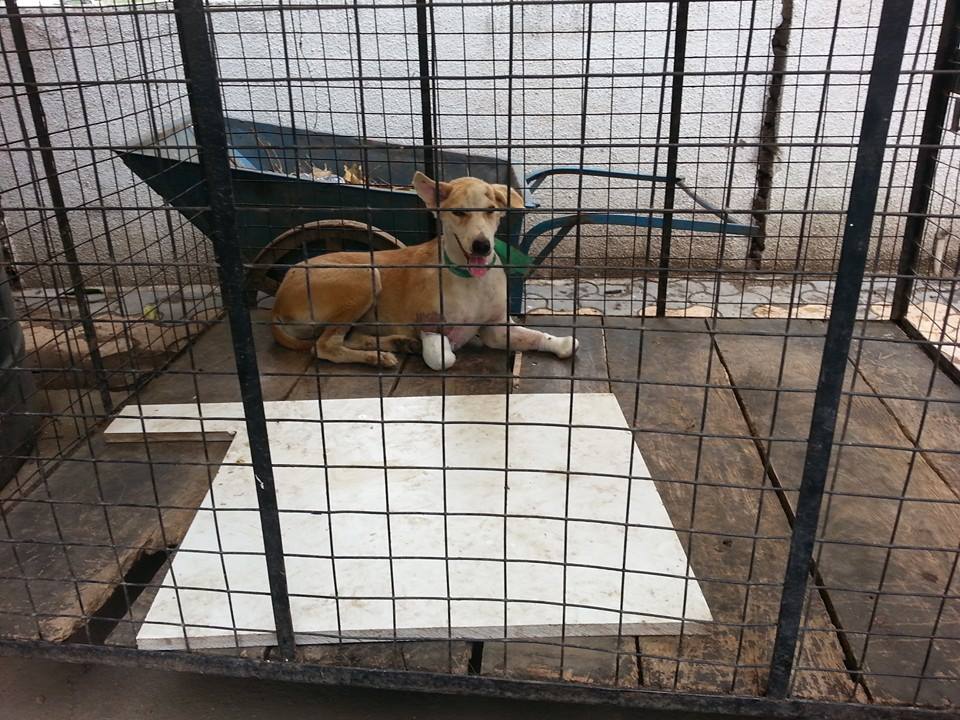 Lessons of life from Rani, The Brave Heart

It was a long day at work on the 11th of July, 2014. On my way back home, I turned on the internet on my mobile to find a notification pop up about a stray dog in Nadiad railway station that had apparently come under a train. The very thought of it was nerve wracking. I hoped someone would turn up to help the needy dog. Then reality struck. Somewhere in the tagging business on social media, the needy lose out as by the time the message reaches the rare few who dirty their hands doing the real ground work, it is often too late by then. What were the odds of a stray dog getting help in a remote city? It was a town about sixty kilometres from Baroda. I was absolutely alien to that place and had no known contact either. Who would tell me about the dog’s whereabouts, if he/she would have survived the accident? Platform number? Colour? Gender?

About an hour later, at six in the evening, I was on my way to Nadiad. I had put everything at stake for a stray dog in need because I wanted a closure. A needy dog left to an unknown fate does not bring peace. I met with heavy downpour on the way. Had I made an impulsive decision without any practicality? What if I was too late? It took longer than usual to reach Nadiad owing to the rains and traffic congestions and two hours later, I was in the heart of that city.

My heart began thumping against my chest as I closed onto the railway station. I was nervous as I stepped inside. I went to the railway police first. “Sir, I got to know about a stray dog that came under a train this morning. Do you have any idea where the dog is?” “No, I do not know,” said an official with a puzzled look on his face. Maybe the station master would be of some help. “Sir, I have come from Baroda for a stray dog that came under the train this morning. I am desperately looking for him/her. Can you please help?” “No, I do not think so there has been any incident like that,” said the station master as he got back to his work. Had I been fooled? “Does anyone here know about a dog that came under the train this morning? I am pleading for help. I have come all the way from Baroda, burning my time, emotions and money. I will be more than grateful if anyone knows anything about the dog,” I said with folded hands to the crowd around, trying to avoid choking in between. Disheartened, as I mentally prepared to search the railway station, a subordinate of the station master came forward and said, “Yes, there has been an accident this morning.” “Is the dog alive? Did he/she get any help?” “No idea about that.” “Can someone take me to the accident location please?” A sweeper came forward to escort me. “Come with me.” I had no other option but to walk along with complete faith in him and the love that had driven to me Nadiad. We met a tea-seller on the way who confirmed the probable location to the sweeper. Finally, the numbers started to add up. A coolie also confirmed about the location and the dog in the last platform.

Five minutes later we reached a dark secluded spot. It was the dead end of the railway station. “Here,” said the sweeper pointing towards what appeared to be an abandoned room. I lit the torch and walked towards the door. The space had not been cleaned since ages and putrid smell filled my nostrils. The door creaked as I pushed it gently. In that humid dirty room, there was some movement, a sign of life. I turned the torch in its direction. As the light fell, it was a white dog, lying all soiled in blood and dirt, with front limbs bandaged, still breathing, alive. I broke into a howl. Tears of joy taste very different. The wild goose chase mission was finally accomplished. When there is a will, there is always a way.

I lifted and it was a she dog. There was no protest from her and the light brown eyes were deep sunk in pain. I placed her carefully in the car and dabbed her with a painkiller, antibiotic and a tetanus toxoid shot. People around blessed us and some were left just puzzled at the thought of someone coming to help a stray dog in distress all the way from Baroda. “Maa, I have found the dog, I am returning with her. I have named her Rani (Queen), she is a brave heart, Ma,” I told my mother on the phone.

For close to an hour, Rani slept like a dead log. Then, a beautiful face looked at me with bright eyes and took a note of her moving surroundings. “Rani, we are going to Baroda. It is going to be your new home and you will have a wonderful friend for company named Butter.” She was a beauty to watch. We reached Baroda around ten-thirty pm and her wounds were cleaned first, her front limbs were all damaged. Then she had a stomach full meal and a sound sleep.

The following morning, the 12th of July, 2014, Rani was successfully operated by the vet (Dr. Angela Lobo) and her front limbs had to be amputated. Post-surgery when I went to meet her, she was a supremely confident dog, left with just two limbs, the hind ones, but that did not reflect on her face, rather it glowed. There was no sorrow or self-pity in her.

I returned home happily with the thought of imagining Butter play with Rani. Prosthetic limbs, shoes, Butter and me would make her feel as equal as us. But destiny had something else in store for us. Three days later, while we were dealing with the loss of Dining Table (a stray dog named so because she was obese to the extent that a dinner plate could be kept on her without the fear of falling) to renal failure, came the news from the clinic that Rani had departed too. The vet suspected an internal haemorrhage sustained during the brutal accident that took Rani’s life. She was buried with full honour for the brave heart she was, along with Dining Table next to her. I wish Rani had lived to sparkle my home with her presence and run around wearing the pink beautiful shoes I had imagined for her. But, in those mere four days, she taught me lessons for a lifetime; to be grateful for the small yet big blessings of life that we might actually be taking granted for, to extend hand to help even when it may seem the most impossible thing because if it is not you, then it won’t be anyone else too, to trust in yourself, put up a brave fight and not to bother about the consequences, to hold head high because you survived, irrespective of the degree of damage you must have sustained and most importantly, to cherish the gift of life. Rani did not live to tell her tale of courage to the world but she continues to inspire. She is a free bird now, running around on her all four limbs intact, where only angels dwell.

Pawprints on the sands of time