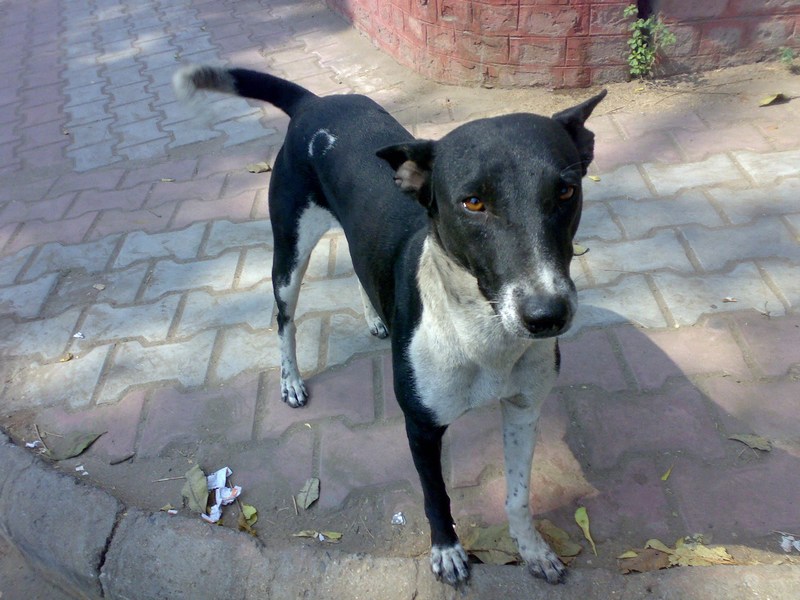 Our Margaret was an unsung hero, but we continue to celebrate her goodness. Margaret was a beautiful black dog with a white band over the neck, wearing a white sock on her right front leg who was born to Katakaan, along with her sibling Christopher in the June of 2007.

Their birth was quite unexpected considering their mother, Katakaan had a notched ear, depicting she had been spayed beforehand.  Born in the premises of a bank, she was less than a day old when we first spotted her.

Her tiny little barks, swift tale revolving like a pendulum, is how we saw her growing up.

The naughty pup that she was, that every tiny step she took to the wonderful adult she became, when she happily brought Bank Laalu to be introduced to us as her boyfriend, when she had that huge gash in her neck that was stitched on the roads to the charismatic leader of the pack (with Saffron, Kaabri and Sundae as her subordinates though she was younger to all of them) that she became; every day, every moment is etched in the heart.

Kata Kaan finally had a clipped ear that was not deceitful of her status. She lived thereon, happily, just for her own self and so did her children, Christopher and Margaret. Margaret grew even more beautiful as she matured. She had survived a run down in her youth that made her chase the rash drivers.

Margaret was at par for the trust she bestowed upon us and we did on her. It is because of this faith, on the 26th of April, 2014, Margaret donated her blood at Dr. Sandip Umretiya’s clinic to save Champ, a four-month-old stray pup, who had been battling for life with severe anemia.

What one may call as the blind faith a dog, she willingly let us put the collar around her and take her to the clinic, from the place where she lived all her life on the streets. No protests, only a wagging tail is what we saw throughout the journey till the clinic. Patiently she sat down on the examination table. Right from the time the needle was infused in her, till the time blood was collected, Margaret maintained her calm and composure. For the faith she had in us and we had in her, there was just co-operation from her end, occasionally watching the blood being collected in a bag and then looking at Champ in the opposite table.

We boast that there aren’t many dogs that would let such a tedious procedure go off so smoothly without a howl or a bark. After that, she sat down and looked at us. We saluted and blessed her because what she did, not even many of us have the courage to do. Though Champ failed to pull through despite the blood transfusion, for the moments he did breathe life with ease was all because of Margaret. Margaret held no airs for the noble deed she did, nor did the world around her know that a simple stray dog gave her blood to save a life. We had a gem in her. She was ruthlessly hit by a speeding vehicle in August, 2018. No stone was left unturned to save her life, but Margaret succumbed to an internal haemorrhage. She deserved better and so do others who are mercilessly run down on the roads every day. Though Margaret is a prized possession of the rainbow bridge now, we see her in every dog that steps forward to donate blood to save a life. We hope our Margaret continues to inspire others, while we will always bask in her glory.

BLIND SPOT: THE ALCOHOL CONTENT IN HOMEOPATHIC MEDICINES IS TOXIC FOR DOGS AND CATS