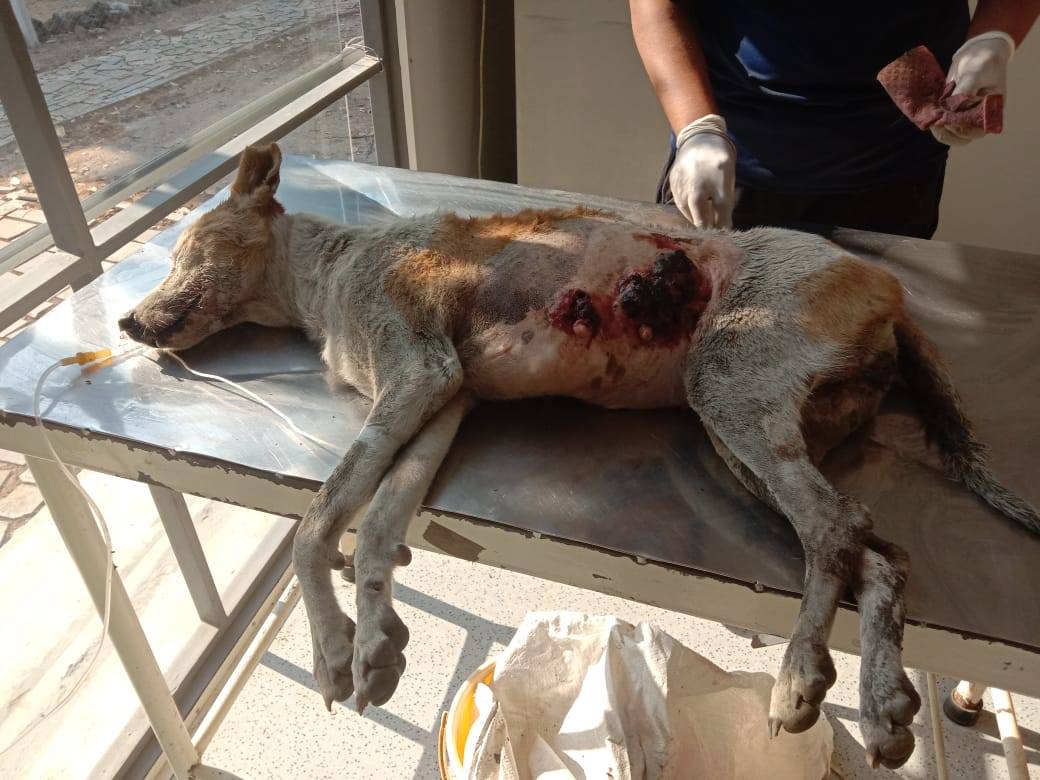 It was one in the afternoon, the 18th of January, 2021. Maa was on her return journey after feeding and looking after the well-being of scores of her children (stray dogs). She was particularly looking for the tumour dog (as she called her), who had a mammary tumour, but was not found that morning. The tumour dog came to ate on some days and otherwise, she was elusive. She would make an appearance once in a blue moon. She was not friendly at all. Maa, several times, sought the help a catcher, who refused to come time and again. Politics in animal welfare (who the dog belongs to is more important than the dog itself – myopic vision) is most damaging to the animals. Others had their orgnisational goals that refused them to help a dog in need as it was not in their agenda. Maa was left with no choice, but to feed and look after the tumour dog as and when she met her. Maa’s to-do’s on the fridge repeatedly had the following words scribbled, ‘The tumour dog’ and ‘The ascites dog (Jammy).’

Even though it was January, by late afternoon, the sun had become harsh. From a distance, as Maa approached the tumour dog’s location, she could see her. She was on the divider, panting, hoping maybe someone would see and help her or maybe, she was awaiting death. Maa put cold milk in her mouth, which she had. How Maa wanted to help her over the months, I was a witness to that and how crippled the system was, that failed my mother and the dog she wanted to desperately help. She dialed a private clinic for help for the now tumour dog who was left with no energy whatsoever to escape.

It was around one thirty in the afternoon when Maa came home. She said she would have lunch later as she had to return to get the tumour dog picked up. She had a glass of juice and she left. In twenty minutes, when she reached the location, the tumour dog had already been picked up by the ambulance and was on its way to the hospital.

By two pm, the vet and her staff had started working on the tumour dog. She was running on hundred and six. Her tumour was cleaned and a blood sample was taken for analysis. Maa returned home and had her lunch monotonously. In an hour, the dog, then named Meesha, had her temperature down to hundred. “Go and meet Meesha in the evening, Maa,” I told Maa, as she was too pre-occupied with her thoughts. “I will do their food in the evening, you go and be with her,” I said with reference to the meal of the children at home.

Late in the evening, when Maa returned home, she was disheartened. Meesha did not respond to her. She showed me her picture. To me, she appeared to be in a comatose condition. “The vet said the night is critical. Lets hope….” said Maa with a pained face. If prayers could create a miracle, I hoped for one for Meesha, for her sake and that of my mother. Late into the night, Meesha’s reports arrived with ‘Meesha Roy’ written on them. A jaw dropping four hemoglobin value with a worrisome complete blood count.

Meesha survived the night. Her body temperature was low. The vet decided to remove the tumour, the root of all the evil. Close to noon, Meesha left to join our massive brigade over the rainbow bridge, much before the surgery.

In her last twenty two hours, a nameless stray dog lying on the road waiting for death got a name, a surname and an identity. The only solace Maa had; Meesha had milk from her hands before she went.

Exactly one year to Meesha’s death, the thought, ‘Could Misha have lived had she got timely help if the catchers had come forward?’ lingers on. The ifs and buts will always remain.