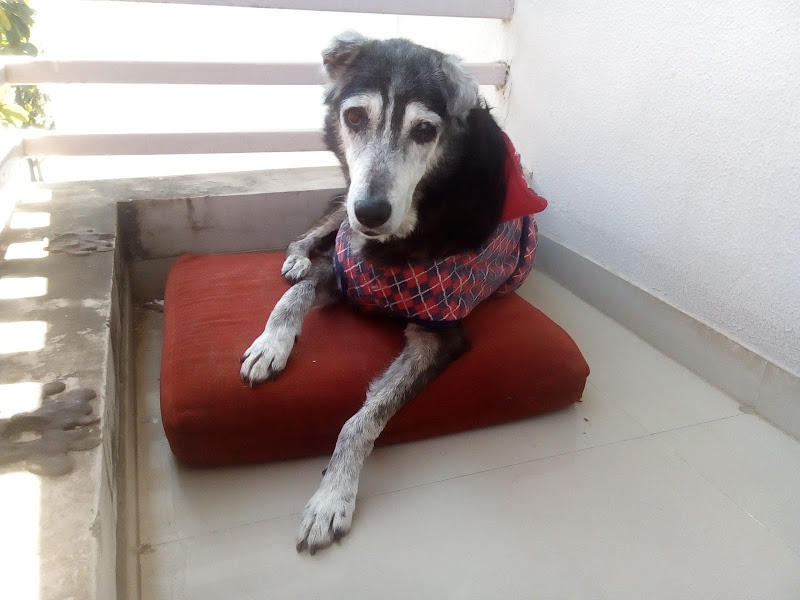 Home Rapunzel, about to be sweet 16!
bblog

It was 29th December, 2005. I had been tipped off by a good Samaritan about a new lactating stray dog. It happened to be my best friend’s birthday and co-incidentally she was taking us out for a party pretty close by to the above location. I carried a food bowl and medicine box, hopeful of meeting the new canines, who my mother could take care of during her daily feeding and first-aid round.

Pure luck, we reached the location and just some distance away I saw a bow-legged long black furred malnourished mother dog rummaging for food. I rushed to her and placed the food bowl and in response, she tilted her big head. Not able to believe her eyes she had been given to eat and that too in a clean bowl, she gobbled the food in no time.

I christened her Marley Mom. Then, came her pups; a brindle coloured male (Tuk), a jet black with a white-collar band female (Cinderella) and an apprehensive looking black female standing at the rear (Rapunzel).

I bid them bye, reassured they were going to get the best of care henceforth. They turned food secure in no time as Maa took them in under her umbrella of daily care, like scores of other strays in the city of Baroda are. The entire brood was sterilised and vaccinated against rabies, by Maa, which is the best means to add a little dignity to the lives of stray dogs.

Life being unpredictable on the roads, Cinderella died in an accident, Tuk migrated and Marley Mom fell prey to a local kill shelter and the offenders were not punished despite evidence and a police complaint. Loneliness dawned on Rapunzel. That is the time we began bonding. Her soulful eyes conveyed her pain. She would not wag her tail ever but come and stand close by, just for a hug. Life is very challenging for a stray dog and more so for a senior stray dog. For a place she guarded all her life with loyalty, she faced the fear of eviction. With weak animal laws in India that consider the life a stray even less than a dollar, she was vulnerable.

So, on the 31st of October, 2020, Maa’s birthday, Rapunzel came home. A warm bed to sleep on, a place to call her home, canines and humans to call her own, the joy of homing a senior stray dog is unsurpassable.

As we complete 15 years of togetherness and are about to ring in what we take to be her 16th birthday next month, we live by the hope that seniors like her find a home, especially when the system and the society fail animals like her.