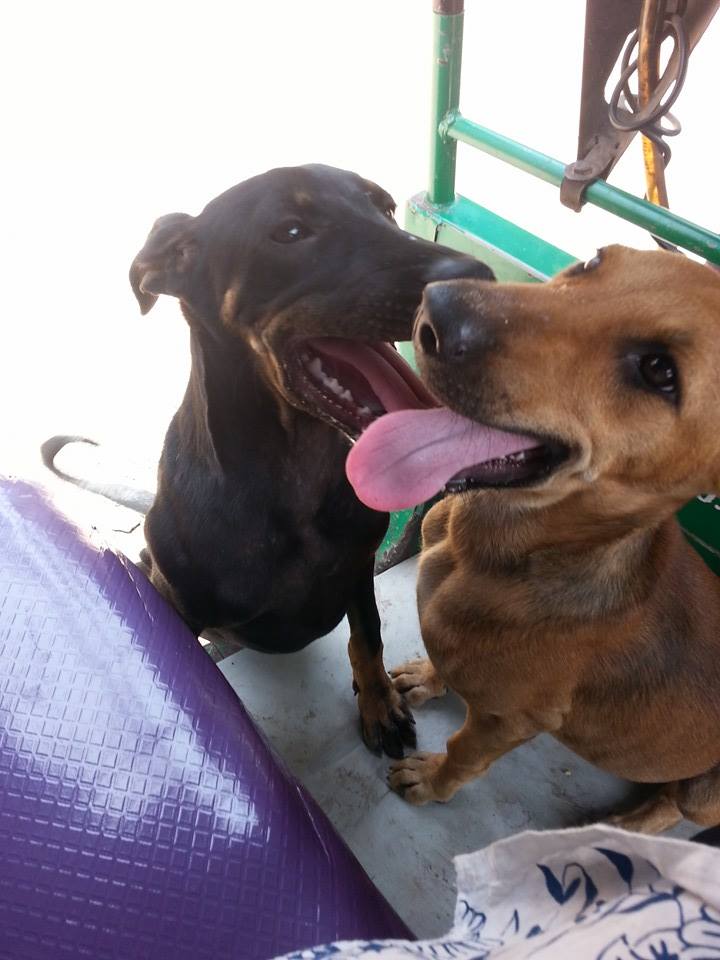 Rim & Jhim, The Rain of Happiness

The first week of May, 2014 brought the first rain of the season in Vadodara and I had stepped into Maa’s shoes one particular day of that week to go for the feeding and first aid round. As the round was drawing to an end and I was approaching college as the last stop, my eyes fell upon two about to be adult dogs who must have been about a couple of months old; one black and the other one orangish brown. They turned out to be extremely human friendly and hyperactive in the first meeting itself. They were so affectionate one would feel they had known me for ages! I christened them Rim, the orangish brown one and Jhim, the black one, as it was raining when we had met. I took their leave once their tummies were full and promised to meet them again the following day.

The next day, the two dog sisters were waiting, staring at the traffic, as though having remembered the appointment of happiness I had sought from them the previous day. As the car came to a halt, they jumped inside. Rim threw the milk bowl and Jhim indulged in self-service, she began to merrily munch the dog food kept in the big can. Under no circumstances were the two pups willing to behave themselves. After they were content with the mayhem they had caused inside the car, they got down. I cuddled them tight and my face was licked umpteen times until I managed to free myself of them. My face smelled of dog food and milk. I wiped my face and told them to behave themselves henceforth and set off.

In the subsequent days, I learnt from a watchman that Rim and Jhim were orphans. They had lost their mother to an accident when they were about a month old. She had gone to fend food for them and never returned. When the watchman described the mother dog, I was able to recollect having seen one fitting her description at the busy traffic junction way back in December, 2013. I had managed to feed her then and had hoped of finding her again the following days, but hadn’t. Since her ear was not notched (meaning she had not been spayed), I wanted to find her to befriend her at the earliest to take her for sterilisation. Engaging in timely sterilisation is always the solution. The need to go for fend for pups does not arise. The spayed mother dog just has to live for herself after that. What their mother must have felt while dying thinking about leaving behind Rim and Jhim. But, looking at Rim and Jhim’s praiseworthy spirit of life, who would have said they were motherless! Their confidence went one level up, when they returned after their spaying surgery. They had made a new friend, Sunaina, the one-eyed beauty, who lived a few metres away from their location and was also under our care, who had gone together with them for spaying. The two often dropped by at Sunaina’s.

Our bond grew stronger with each passing day. When I arrived at their spot, they jumped, barked and engaged in some acrobatics out of happiness. It was followed by throwing the utensils after having jumped inside the car or the autorickshaw. Scolding hardly ever made a difference to them, they always did what their heart told them was right. If preparing their food bowls took usual than longer, they started eating on their own from the big container of dog food. Once satiated with food and love, they had to be shoved out of the vehicle. Farewell from their end was as grand as the welcome was; another round of play, barks and jumping followed. They had a lot of vibrant energy and love to give. They had to be bribed with an extra helping of biscuits or dog food, otherwise taking leave from them was difficult. With Maa, somehow, they were the most obedient and disciplined pups. They would keep wagging their tail, patiently wait for their bowls to be kept on the ground and would never jump inside the vehicle. Basically, all the naughtiness was reserved for me and obedience and etiquettes only for Maa. The beautiful chaos that ensued daily had become entertainment for the locals of that area. The Rim and Jhim brand of acrobatics, energy and love was difficult to be ignored. The take home message from the two sisters was, ‘Forget all your worries and be happy.’

Soon, a male dog, a replica of Rim, joined the pack. In all probability, I suppose he must have been Rim and Jhim’s father. I named him Manohar for the soothing calm his presence brought. He would watch his daughters causing mayhem and would wait for them to finish despite being given food along with them. He had gratitude for me in his eyes. He was magnanimous to the extent that when a passer-by showed him a kick for no reason, he wagged his tail for him too. Only a noble soul can do that.

Then, a very aged male dog, with a smiling face added to the pack. He had a name given to him by the shopkeepers nearby but we chose to call him GrandPa, keeping in mind his age. He behaved like an indulgent grandfather to Rim and Jhim. He loved watching them throw dog food and allowed them to play with his tail. It was indeed one happy family. But the happiness was short lived.

Rim was hit on the head by a car, leading to head injury. It was very traumatic for her and for us too to watch the once jovial, full of life dog struggling to pull through. However, she began responding to the treatment but died all of a sudden despite giving hope all through. Jhim mellowed down after Rim’s death. Though Manohar and GrandPa were there, she missed the presence of her sister. She became serious, she started behaving herself and ate from the bowl on the ground without getting inside the car. This was not the Jhim I knew. I began keeping her inside the car or the auto myself with the hope she would resume her antics, but she did not. With Rim’s death, Jhim lost her soul.

Jhim disappeared on the 24th of August, 2014. That was not all. So did Sunaina, mysteriously. Where do the friendliest of the stray dogs disappear, despite being fed and looked after for their medical needs daily, if any, remains a mystery even today. Sterilised dogs rarely shift base. I felt broken inside, having invested my emotions in the two of them in such a short span of time. There was no one left to cause mayhem inside the car or the auto and throw things around. The place lost the glitter of happiness and hope. Rim and Jhim were the life of that area and I believe everyone looked upto them in times of need because their love and happiness was so infectious. Rim must have set the rainbow bridge on fire with her jovial, hyperactive and booming attitude. May she always glow. From what I learnt from the two sisters, I still live by ‘hope’ to see Jhim someday once again.

Tuna, the cat & his teachings