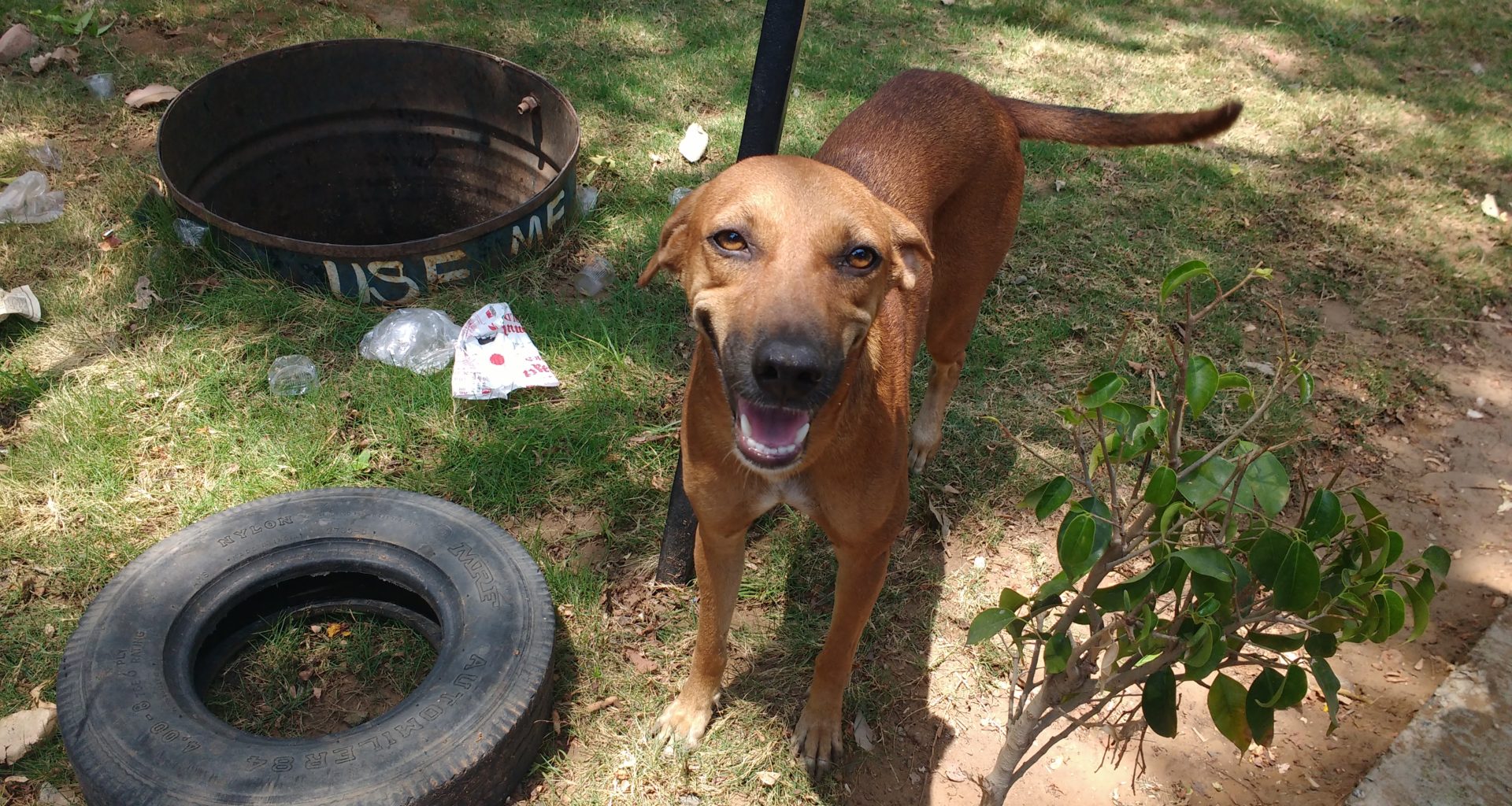 Home Sanjana, the harbinger of hope & happiness
sshine your light

Sanjana, the harbinger of hope & happiness

It was the 2nd of April, 2016 when Maa called me frantically about a pair of dogs, not even adults then, wearing red ribbons around their neck (a give-away of the Animal Birth Control agency that was doing everything under the sun to make the lives of the stray dogs miserable in Baroda, as the organisation was not following the animal birth control protocols at all), who had been wrongly dropped off post sterilisation at Christopher and Margaret’s spot. They were running aimlessly middle of the road, trying to seek refuge in an unknown territory, but were being chased away by local resident dogs. The barking that ensued, even people joined in to make the matters worse (accidental dog bites and accidents usually happen under such circumstances, that is why it is necessary to drop back the dogs post sterilisation only to the place they belong to). Maa was able to follow the pair of dogs only upto a certain point until they disappeared over the horizon. Maa returned home frustrated and helpless thinking about the plight of those dogs. A stockpile of complaints against the notorious agency was only meeting deafening silence, leading to more cruelty on the stray dogs and creating unnecessary man-animal conflict. This is what happens when the animal birth control programme goes un-monitored.

The following day, the two dogs sought refuge in a college campus (a zone that was rabies free, no dog multiplication due to sterilisation for eleven years at a stretch) and Maa had managed to feed both of them despite the resident dogs trying their level best to shoo them away. I met the pair a day later. The male dog was over friendly, all grey and had a twinkle in his eyes. His sister, was all orange and had beautiful kohl eyes. Both were afraid of the new territory, new dogs and new humans around. Named Adam and Sanjana, respectively, they found peace in me and I found mine in both of them.

The siblings soon found acceptance with the resident dogs after licking their faces and receiving some bashing from them. Langdu, the new leader of the pack, after Guchguch had come home post cancer surgery, had a sudden boost in confidence with Adam and Sanjana as his subordinates.  Then, the siblings became friends with the security guard at the gate and the two could be seen welcoming everyone, irrespective of whether their love was reciprocated or not. They were a bundle of joy. They would jump, announce to everyone with their barks that food had come for them and the tails kept wagging. They would eat from the same bowl although they were given separate bowls to eat from. Although Adam would bully Sanjana, yet he was protective about her. It was a joy seeing them grow in terms of confidence and spread love in the premises that could in no way reciprocate it. Infact, when I had left after giving my doctoral viva, the two of them were waiting for me with the same love and affection where qualifications don’t matter, but only the love does.

Just when happiness, confidence and a sense of belongingness became a part of their lives, on the auspicious day of Rakshabandhan, 18th of August, 2016, the watchman stopped me at the gate to inform about a dog in the parking lot unable to walk. Sitting at a distance, alone, writhing in pain was Adam. It was shocking to see a once joyous, lovely and affectionate soul, left with no control over his limbs, sitting at one place, unable to get up. He was ruthlessly hit on his hind legs that left him paralysed. His eyes had so much to say, as though trying to make me understand the horrid episode of cruelty he had been through. Adam died on the 24th of January, 2017. I was not around him when he left.

As for Sanjana, she picked up life after Adam. She imbibed his traits as she exuberated even more love for people but sadly, she only met with hatred and disdain, because she was a stray who did not understand the boundaries, we humans erect around that are not to be crossed. While she wagged her tail, she even received the loudest of ‘haaattts’ from some of the teaching faculties. But she never gave up on the love she had to offer. She ended up changing a few lives for the better, she taught other humans that stray dogs are not to be feared, but loved.

She became my rescuer as the year 2019 came to an end. When I was in a mess after Butter and Matalu’s death, she taught me to smile again. She would somersault and urge me to play. She taught me to chamber my pain and embrace happiness once again, all in her company. I owe my life to her. How could any dog be so giving who had seen unsurmountable challenges in her everyday life? While she loved everyone, I understood, even dogs do favouritism; as she loved me the most and so did I, as the best of us was reserved for each other, when nothing in the world mattered when we were together.

Sanjana’s life came to an abrupt halt on the 28th April, 2020, when a milk van ran her down at three in the morning. No one had the right to snatch her away from me so ruthlessly. Why do the traffic rules not address the issue of animal run downs? Sanjana gave me life and herself went away. I did not get to see her, forget burial. The siblings are gone, both due to human callousness, but their tales echo inspiration to live life to the fullest, come what may the circumstances be. They are together, miles away from human brutality. Only if the world was a little kinder to them, we would still have been together.

If you feel my pain, the suffering of Sanjana and Adam, please do give animals a brake.

Thank you, Cats Matter, UK for supporting Give animals a BRAKE campaign

Dharamveer was lost to a road hit, please give animals a BRAKE!