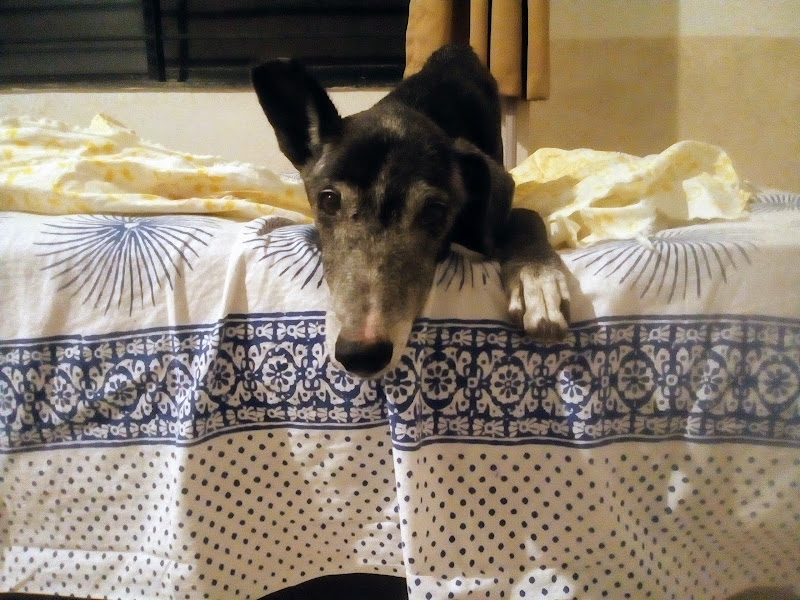 Home The dog behind the locked door
bblog

After his mother, Nani’s, unfortunate demise, Kaale Mamu/Kaalu/Kaalu Mama became dark on most occasions. He feared for his life, given his loneliness. Old age is no different for stray dogs than it is for us human beings. Ghungru Lal, who used to be his mother’s subordinate, migrated with his human family back to the village. The only moment of happiness in Kaalu’s life, was the ten minutes Maa spent with him every day to look after and feed him. In just two claps, he would appear out of the blue, wagging his tail. He was a frugal eater and his age advanced further, food became of his little interest. He would dash back to hiding before Maa left his spot.

Two months down the line after his mother’s death, Kaale Mamu developed a wound in his back. Two consecutive days of on the spot treatment (veterinary doctor guided) later, Kaale Mamu disappeared. None of the local residents had any idea where he was. The only silver lining, they had known us for years and would inform us first rather than blindly send the dog to a shelter. The first two rounds of search were done by Maa, covering 50 kilometres to and fro each time, but to no avail. The second round I did, in the afternoon, again to no leads. My hands pained as I kept clapping incessantly, but Kaalu would just not appear. Where was he? What had happened to him?

I decided to do another round in the evening as Kaalu could not have vanished into the thin air. An hour of clapping later, my eyes flooded with tears and I cried while no one around could watch. Kaalu was just not there. It is then, one of the local residents was returning from the office, he said, “Madam, did you find him?” “He is just not there.” “Wait, let me go and check.” His optimism at that point was in stark contrast with my disappointment over the fruitless search.

Half an hour later, when the sun had almost set, the local resident screamed jubilantly, “Madam, he is here!” He pointed towards an old dilapidated house that was locked while its main door was ajar. With a sudden rush of energy in my feet, I dashed off. There, lying inside, was a lanky jet black dog, with a frosted face and chocolate eyes, that were not even blinking. Was he dead? I said, “Kaalu, Kaalu.” There was no response. He blinked a minute later. He was alive. It went without saying, he had no energy whatsoever to even get up. But how had he managed to get inside a locked house? It turned out, the back entrance of the house had a small hole in its door from which a dog could easily sneak in, but a human could not. The back door entry was actually not possible otherwise as well as there was a dense patch of overgrown shrubs and mini trees, as a result of monsoon rain.

Then, the greatest question was, how to get Kaalu out? It was getting dark and there was no electricity in that old house. That would only complicate retrieving him. Right at the entrance was a big lock. There was no other option, but to break it open, if Kaalu had to be saved. I ended up doing the first door break of my life with help from local residents and the autorickshaw driver. Kaalu was in no shape to protest. I lifted him and dashed off to the auto and told the autorickshaw driver to rush to the clinic. I thanked the local residents for their support, without which retrieving Kaalu would not have been possible at all.

On the way, I dialed the vet and requested for a priority check for an emergency case I was rushing to him. All during the twenty-five minutes journey to the clinic, Kaalu was calm, but there was a lot of rumbling noise from his chest and stomach. As soon as we reached the clinic, I sent the autorickshaw driver inside to inform the vet we had arrived and to allot us a table ASAP. The vet signaled to wait for five minutes. In that time period, Kaalu had a fit and he began to howl. I freaked out.

In two minutes, we were taken inside. “He appears to be a very old dog, Madam.” “Yes, doctor. He is 2007 born. He hid himself for two days in an old house and I retrieved him a while ago after breaking open a door. Please help him.” The vet took temperature and immediately assembled the material to begin Kaalu’s IV. He inserted the needle and the infusion began with add ons injected in the bottle. Kaalu was calm upto four hundred ml of infusion and then he had another fit infront of the vet. He screamed in agony and the vet and I tried to calm him down. “What to do about the fits, doctor?” “Does he have a history of fits?” “No, not at all. He was perfectly fine until two days ago and then he disappeared.” “Then, maybe it is the hypoglycemia. Madam, let us wait and watch, we will take a blood sample tomorrow morning and see what it is. I have a hunch his heart is involved, given his advanced age.”

Just as we were about to leave the clinic, a kind lady (who was a witness to Kaalu’s fits at the clinic) with tear riddled eyes came and blessed Kaalu. She said in Gujarati that Bappa (Lord Ganesha) will save Kaalu. There was so much warmth in the lady’s prayers. I thanked her. At eight in the night, Kaalu and I started for our journey to home. Thankfully, there were no fits on the way. Half an hour later, we reached to a roaring welcome at home. In moments of utter chaos, their barks have always brought peace.

I brought Kaalu in on my lap. He developed the strength to be on his legs as I kept him on the floor. What more, he wagged his tail. It was some relief. He recognized Maa immediately and wagged his tail vigorously, a lady he had known all his life who was his food and love provider, always.

At one forty in the night, Kaalu got up and sniffed the bed. Two minutes later, he had discovered the comfort of sleeping on a bed and I was right by his side. As the night passed through, he did a foul smelling vomit, an odour reminiscent of renal failure. Was two days of no eating, when he was in hiding, so detrimental that his parameters were out of control? Only a blood sample in the morning would tell the truth. I kept him on Digyton and Rkleen with the hope that things would turn in our favour. He did not seem inclined to eat much everytime I offered him small feeds (to prevent refeeding syndrome). He had two more rounds of fit in the intervening period. But, Chhutki and Zenobia, gave me hope and company, as both did not sleep during the night. Chhutki had learned to be a nurse dog from Georgina, while Zenobia is learning from his adoptive mother to be one like her.

At nine thirty in the morning, we were all set to leave for the clinic. The moment Kaalu saw Maa once again, he rejoiced and walked around with his lanky legs and tail swinged up and down in happiness. “I can sense hope, Kuhu,” said Maa as she drew her Kaalu into an embrace.

All during our journey to the clinic, Kaalu was alert, he watched the traffic. As we entered the clinic, the vet asked, “Madam, is it the same dog you had brought yesterday?” “Yes, doctor,” I said, breaking into a smile. “There is a lot of life in him today.” “I hope so too, doctor. He did a foul smelling vomit and does not seem inclined to eat. He has hyperacidity.” “We will see.” He took a blood sample first and then started the infusion. The five hundred ml went in smoothly with the add ons. Kaalu was patient, he carefully watched the vets assistants while they cleaned around and wagged his tail for the vet and also itched himself once in between. By the time it got over, Kaalu had energy to get off the table. It is at that point, even I developed hope, but I was scared as the blood report was due.

When we returned home, Kaalu’s eyes demanded food. Was he really wanting to eat? I rushed to the kitchen and prepared a small portion of meal. As expected, he gobbled it down and wagged his tail asking for more. Thereon, I began to time his meals at every four hours. There were no vomits, no fits and the icing on the cake was a normal renal and hepatic profile, even though his age was advanced (maybe because he was looked after every single day of his life on the streets), but was mildly anemic.

Thereon, Kaalu is a changed dog with homing. When the vet came for a home visit a week later, Kaalu paid him the most beautiful fees, a priceless tail wag for saving his life. From a frugal eater, he has become a dog with a voracious appetite. While all his life he had earth as his bed, now he cannot do without the soft mattress he sleeps on. He now has a secretary as well (me). Loneliness has been replaced by more than sufficient dog and human company, the two humans he has known all his life.

It is the adopt a senior dog month. Do you have a story to share? Write to us at admin@bridgingrainbows.com

Honey, the most wonderful companion

Jammy, from near fatal protein deficiency to a dog with enviable muscles; a miracle