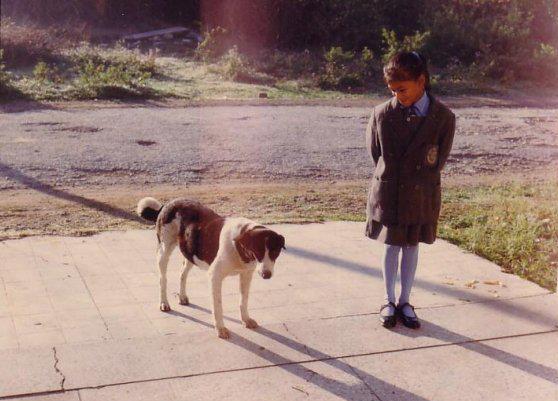 I was introduced to companion animals and their status as equals at a very young age. Dadu and Dimma’s home in Calcutta was always open to abandoned and abused dogs and all the nearby stray dogs had a feast twice daily. Nani and Nanaji’s home in Lucknow was synonymous with the presence of stray feline members. Infact, no animal was ever turned away hungry, on one occasion, an injured vulture included.

So, I looked forward to summer breaks because maybe that is the kind of life I dreamed of, to live in the company of animals, to tend to them just for the sake of love and happiness.

I could never have one at home because parents were working and I was too young to take any responsibility. On second thoughts, I possibly could have. But that factor did not deprive me of their company. Papa took me for walks in the evening to bond with nature wherein we enjoyed watching megh (clouds), gaach (trees) and goru (cows) and return home only after feeding the hungry cows and dogs we met on the way. It is one of the most beautiful memories of my childhood days.

Then, at home, I had Deegu, the one in the picture, my prized possession. She dropped by during breakfast and dinner while her lunch and stay was fixed at an old lady’s place whom I fondly remember as Bhutani aunty.

Back in the late 80s and early 90s, strays were an integral part of what comprised a community. It was also perfectly fine for us children to have a stray dog as a friend. Our parents taught us how to behave with animals so there were no dog bites and we never even heard of the term rabies as a kid. Infact, Deegu was a property under dispute and all seven of us; four girls and three boys would fight amongst each other for her ownership rights. I never had to put much of effort as Deegu always walked home with me. She also trusted me with her pups as she allowed me to be their nanny while she slept.

I had once accidentally stepped on Deegu’s tail while playing. She yelped in pain and stepped aside. She never bit me. Dogs are sensitive to children, their needs, fears and the mistakes they end up making unintentionally. I was scolded by Maa not to hurt Deegu ever again. Compassion and kindness was a way of life. The good old days.