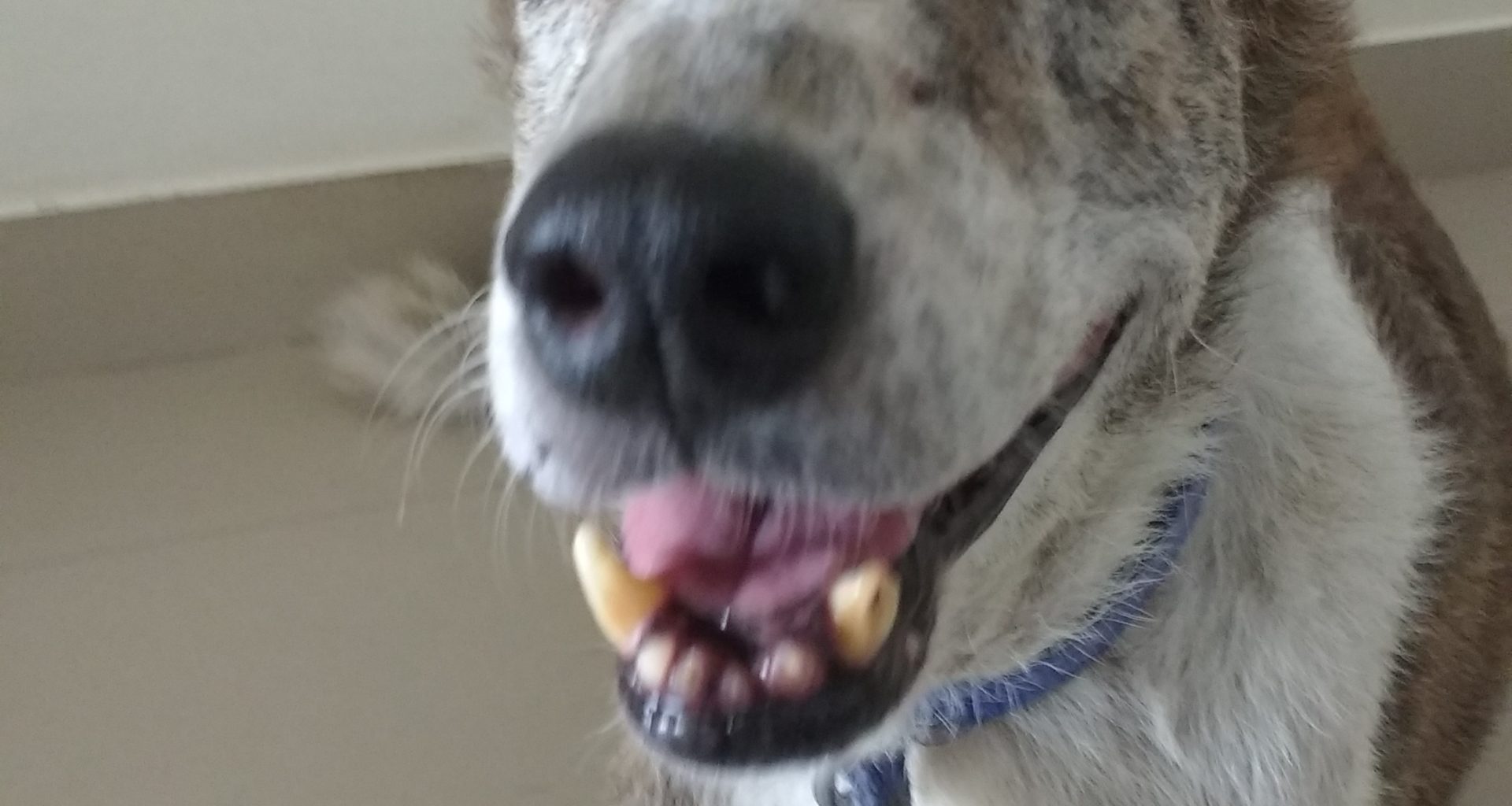 A winter morning in December of 2005 brought to my notice an emaciated stray dog sitting on a pile of sand near my college entrance gate. He had three colours of long fur; predominantly brown, black stripes and isolated patches of white, often referred to as brindle. He was salivating abnormally – a sign of stomatitis. Before I could get any closer, he ran away and disappeared over the horizon, a very timid dog.

The following day, I combed the area but could not find him. A month later, I spotted him again. He had survived stomatitis and continued to appear malnourished, with pelvic bones and rib cage visible. I made an attempt to go near him and he ran away yet again. I assumed he must have had strong reasons for being mortally afraid of the mankind. I let him be.

In the days that followed, I saw him moving around the campus every day, albeit treading carefully so as to avoid proximity with any human being. The moment anyone turned up near him unexpectedly, he simply disappeared. There had to be a way to approach him that would not perturb him of my presence. The following day when I saw him hiding behind a bush, I pretended as though I had not seen him. I casually walked around the area and dropped a few biscuits from my bag and moved away. To observe his reaction, it was my turn to hide behind the bush. The idea worked as he began munching the biscuits. He had been terribly hungry. That set the ball rolling to try even harder to win his trust.

I repeated the same exercise for another day. By day three, the dog had started associating me with food although he remained in hiding every time and I did not look at him even once. In about a week’s time, he was willing to tolerate my presence, from a distance though and no eye contact. The distance between us halved in a month’s time of what it originally used to be. A perceptible change in his behaviour was his excitement for food. He broke into a run on my approach, although with distance. I was a mere food delivery human for him. However, to show affection from my end and give him an identity, I named him Tri, because he had three colours of fur. So, the name Tri became synonymous with my appearance with food for him. He eventually started responding to the name.

With each passing day, I tried to the best of my ability to build a bond between us. He was timid to the extent that he preferred to meet me when the resident dogs of the campus (Bhaalu, Goshi, Rani, Tuki, Jukjuk and Guchguch) were not around. When we were together, I engaged him in some confidence building exercise; I clapped to appreciate every time he finished food, repeatedly called him by his name to reinforce a sense of belongingness. Efforts started paying dividend in about an year’s time. I could stand next to him when he ate, however petting was simply out of question. I had to respect his boundary.

In the winter of 2006, Tri had another bout of stomatitis. He was not willing to take the medicines wrapped in a small cube of sweet and neither was he inclined to take food. I started spending more time with him, just to be by his side. That was the least I could do to make him understand that I cared for him. During this period, he became weak, lost weight and the degree of salivation went up. He refused medications and escaped to be caught for treatment. Watching him suffer was a helpless feeling. His will power gradually began healing him. The salivation went down and he started showing inclination for food. During recuperation, our bond had become strong. I started feeding him twice daily those days because he required more nourishment for recovery. When he healed completely, I got the best gift I could have ever asked for, a tail wag from him. It was a huge reward for one year of patience and persistence.

The tail wag became a daily feature thereon and with his shining teeth visible when he came to greet me, it felt as though he smiled. Our bond had indeed strengthened and stood the test of time.

The beautiful brown eyes that once only had fear, had started glowing with love and affection for me. To further strengthen our relationship, Goshi, Rani and Jukjuk, the three spayed female dogs of the campus, lend a helping hand.

They started accompanying me to feed Tri.

They played and enjoyed and often hinted at Tri to join them. Tri was not able to resist the temptation to have company of his own species; he became a best friend to the three ladies.

Tri started to open up and learn to let his shyness go. I clapped and appreciated watching them play together and that further reinforced his positive behaviour. A reward from my end used to be an extra helping of food for Tri and his new found friends.

As a result of this confidence boosting activities, Tri gathered the courage to come and eat along with other resident dogs of the campus (Bhaalu, Goshi, Rani, Tuki, Jukjuk and Guchguch) when they were fed everyday in the morning by Maa for eleven years at a stretch, ensuring no resident dog multiply by getting them sterilised and vaccinated against rabies.

Although Tri hid behind the revolving door, Maa played a fundamental role in making him comfortable with the rest of the brood. Soon, Tri started wagging his tail for Maa too. It was a welcome step.

One particular day, instead of three wet noses, four nudged me. It came as a beautiful surprise that the extra snout was of Tri. He seemed happy to have tried the new form of greeting. Just like the tail wag had become a habit, so did the nudging over a period of time. I wanted to give petting a try then. When I touched him for the first time very discreetly, I moved my hand away quickly, not to make him conscious about it. I repeated the exercise every day until in a month’s time, when petting too became a habit for him. It was two and a half years of patience that had paid off. I had won his love and confidence. He, just like Jukjuk, started waiting with her for my college hours to get over so that we could sit in the lawn, eat together, play and enjoy each other’s company.

Tri was a completely transformed dog by the end of three years.

Destiny had to it that one by one Goshi (died due to spinal injuries sustained in an accident), Rani (disappeared after meeting with an accident) and Jukjuk (died untimely due to acute renal failure) perished and Tri was left with no dog company. We found solace in each other, especially after Jukjuk’s death, that had shaken both of us to the core. He started behaving with me just like Jukjuk used to. He kept waiting for me in the college, especially for my classes to get over so that we could sit together in the lawn, hold hands and talk. He had stepped into Jukjuk’s shoes and become my healer. He chose to be my saviour realising the vacuum I had been dealing with after Jukjuk’s untimely departure.

In the meanwhile, three new female dogs (Vajanti, Damyanti and Chashmewali) migrated to the college campus as no female dog had been left to protect the territory (the three females were taken on a priority basis for sterilisation by Maa). They enjoyed bullying Tri and he returned to his shy and insecure self in no time. He had aged and was in no position to defend himself so he chose to stay in the oblivion, making lesser appearances with each passing day. There were times when he disappeared for five days at a stretch, leaving me worried about him. I left the campus in May, 2016 after the completion of my doctorate and by then I hardly ever saw of him.

Then it was my turn to be his best friend and faithful companion, just like he had always been mine. I brought him home.

The first day, he was confused, puzzled and only my presence comforted him. He must have been around twelve years old at that time in June 2016.

He soon started opening up in the comforts of home and made his first friend, Distemper (a rescued stray dog who had been a distemper survivor) and the other rescued canines of the house welcomed him with open arms, namely; Butter, Guchguch, Georgina, Jalebi, Tweeky, Orange, Ronaldo, Natasha, Chutki, Rahul and Ascites Rani.

In about a month thereon, Tri had settled as a house pet and Maa had made him wear a collar that added to his beauty.

He had undergone another degree of transformation as he looked for human touch and petting all the time whenever we were around.

He continued to press his wet nose until a hand was kept on him and his soulful eyes had all the love in the world one could ask for. He became very comfortable meeting new human friends and looked forward to their affection.

He was also a very intelligent dog who knew counting. When he was given food, he rejected it thrice and accepted the fourth time. He loved to have milk that had a higher proportion of fat and outrightly rejected skimmed milk.

Tri came to my rescue one more time after Georgina departed. He nudged me with his wet nose, tried to cheer me up and whenever I wept remembering her, he pushed and nudged me even harder. He stepped into Georgina’s shoes as well. He started with cries of happiness in the morning, trying to mimic Georgina and started sleeping with me, ensuring the touch, just like Georgina did.

Tri was God sent. I did not rescue him ever, but he rescued me twice when I needed help the most.

The transformation of a timid stray dog who went onto becoming a loving senior pet dog, was heartening. He aged with his love for humans growing manifold. Those wrinkles on his face, faded fur, glazed eyes added to his beauty, silently reminding us of the time span we had spent together.

I lost him in March 2020 to paralytic stroke. We both kept staring into each others eyes until his became opaque with the last breath he took.

His absence created a huge void. But, Tri remains a symbol of victory of love over fear.

Timid and senior dogs deserve as much a chance of homing.

Jasmine, My Gift from God