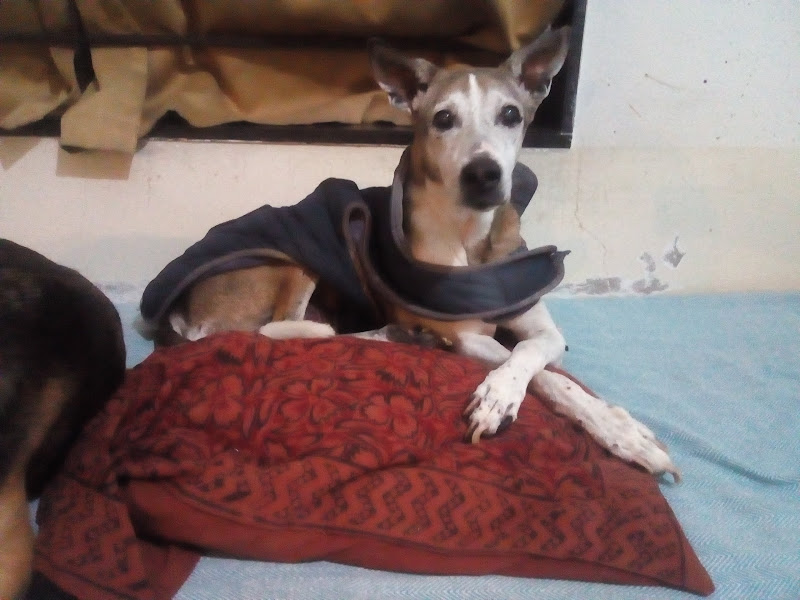 Home Tweeky, from a once misunderstood dog, to peace keeper of our home
AAdopt dont shop

Tweeky, from a once misunderstood dog, to peace keeper of our home

There had to be a reason as to why the grey tan male stray dog tried to bite me off. Was my friendly behavior a provocation? The ‘why’ behind a dog’s behavior is always ignored. However, in the following days, I tried to get to the bottom of it. He, along with an orange female and a white male dog with orange spots, were subordinates to Georgina, a female stray dog who lived on the streets of Mumbai. The trio chose seclusion from the mankind. They moved together and looked for places of calm that did not have any element of human interference in their life. But, they were not able to escape the bullying children ever. The children came and teased the trio and they chased off the children in self defence. Anyhow, even if the dogs were not at fault, because they were stray dogs, that was a fault enough. It was the June of 2007.

My father, Dr. S.K. Roy was already taking care of Georgina and her only surviving son from the last litter, Jalebi. His pack expanded and the trio became a part of his extended family. I was not surprised because my father has always been a dog whisperer. In my next visit to Mumbai, I christened the female as Orange, the grey tan as Tweeky and the white one with orange spots as White. Fortunately, they spared me a chase. It was evident they had been introduced to love and care for the first time in the abuse filled life they led otherwise in a toxic environment. That said, I was not welcome by them at all, but they shared a fantastic rapport with Papa. I was miles away from their world and they did not need me at all, as long as they had my father. They knew, regardless of whatever time Papa would return from the office, however his day went or whatever the weather condition was, they would never go to sleep hungry.

There were several attempts to stop my father from taking care of them by the local residents. White paid the price, he was removed under the pretext of sterilization by some nefarious resident and never brought back. But, Papa did not give up, ever, on anyone of them. Then, a professional commitment required Papa to shift base. There on began the Herculean task to look for someone trustworthy who would take care of Georgina, Jalebi, Tweeky and Orange. While there were countless whatsapp and facebook groups, they were just all talk. Not one soul, despite being offered financial assistance for the upkeep of the four, stepped forward. Then, a little known animal lover who used to silently feed the nearby dogs, stepped in. But was it really going to be that easy?

Thereon began their and my struggle. They became the four chambers of my heart. Every month, from Baroda to Mumbai, I would fly down to be with them for two days. How they yearned for my father and a sense of protection that his presence offered. When I left two days later, Georgina would run behind the cab or the auto. I always returned with red swollen eyes from Mumbai. Two local animal lovers were tremendous support, they ensured to silently feed the four everyday. One of them, Bharti aunty, would even take me home to have lunch with her when I would be in Mumbai. It meant a lot.

Troubles kept escalating for the four. Practically every single day, my phone rang saying, “This one, that one, bit someone.” I had developed a phobia every time my phone rang. As though the daily struggles of looking after the strays in Baroda was not enough, this had started to consume me even more as the four were in a different city altogether.

For the sake of my peace of my mind and their safety, an impulsive decision later, Georgina, Jalebi, Tweeky and Orange left Mumbai with me and came to Baroda in November, 2014 (Tweeky and Orange had to be tranquilised by a professional as they did not even let anyone touch them). That was not the end of our struggles. My father, their father, came forward and built a home for them (not a shelter). No one does that for stray dogs, my father did and I am so proud to be his daughter.

Georgina, Jalebi, Tweeky and Orange became the four foundation pillars of our extended family at home. True Mumbaikars, they were large hearted. The entry of Chhutki and Ghoplu, two rescued pups, turned Tweeky and Orange into adoptive parents. For that matter, any need soul who was brought home was welcomed by Tweeky and Orange to become a part of their family. I did not save them, they saved countless lives that graced our home. Tweeky became the peace keeper of the house, the saintly soul. Was he the same dog who had lunged to bite me in 2007? Tweeky was a misunderstood dog who only needed love to become who he really was. Because I had Tweeky and Orange at home, Maa and me were able to bring other needy souls who had nowhere to go. I have always heard others say, “Our dog(s) wont adjust.” How do ours? We did not train them. Tweeky and Orange were magnanimous souls who understood that anyone who came home was actually leaving behind their horrid past to build a beautiful present and future with them. I owe everything to the four chambers of my heart.

After Butter, if there was a constant at our home, it was Tweeky. He gave us seven years and three months of his life to his home. He was the only dog who had the good fortune to meet each and every rescued dog who came home. Everyone left, but he sticked on. Our unspoken love had so much strength and trust that he allowed me to give him medicines, pat him off to sleep at night. Tweeky, out of the blue, left at 225am on the 25th of February. He left holding my hand, looking into my eyes. He did not give us the time to prepare for a home without him as he was in the pinkest shade of health despite being aged 16+.

With Ronaldo and Rapunzel needing back to back vet visits every day, there has been little time to mourn Tweeky’s loss. But it hits really hard when I step inside home and find his bed vacant. He was the quietest dog ever and his departure has turned home silent.

Dogs do mourn, Tweeky’s adoptive children, Chhutki and Ghoplu sit together and miss him as much while Zenobia runs around the house looking for her adoptive Grandpa. That is the beauty of our home. None of these children are related to each other by blood but they have a rich legacy of the four chambers of my heart to live upto.