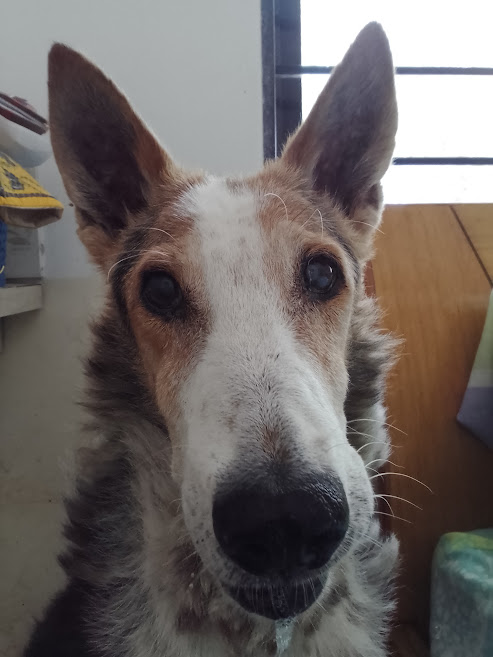 The second of April, 2022 was an eventful day. Rapunzel, our sixteen-year-old, was drifting away when ‘The loss of a pet,’ a book gifted to us by a close friend was received. She had sent it to help us navigate through the rough patch the first quarter of 2022 had begun with, the loss of Tweeky (16+), Ronaldo (8+) and Mallika (14+). In another half an hour thereon, Rapunzel too had left. After she was laid to rest, I tried to go through the book with blurred eyes. Nothing made sense then, I was too tired and numb. I kept it aside and closed my eyes when I heard Maa talking on the phone about a stray dog in distress.

An hour later, late in the evening, I was on my way for White Collar, a 14+ child, who had apparently collapsed on the roads after a bout of epileptic fits. When you have hundreds to look after, there is no room for compassion fatigue. White Collar’s pick-up was easy; he was in no shape to protest. The giant dog sat on my lap comfortably all throughout our ride to the vet. It is then I noticed much of his left cornea appeared to be opaque. The vet confirmed that minutes later with the right cornea being in the same condition. A blood sample later, White Collar and I came home. It was a familiar feeling, the seniors coming one after the other and the joy of introducing them to the comforts of home in their twilight period. Although it hit very hard when I entered to find Rapunzel’s bed vacant, it was counteracted immediately when White Collar found himself a cozy place right beside my bed to call it a day. Maybe this is what the circle of life is. In an hour, his good blood reports came like a gift on what was my birthday eve.

As he completes three months at home, the issue of epileptic fits is close to resolved and the bare minimum that White Collar can see, I am privileged to be the centre of his universe. He follows me wherever I go. My shadow has a long bushy tail.

There is maybe no better way to find some semblance after a loss but to open up to those who have never known love and care.

PS There was a lot of friction between White Collar and Zenobia, the youngest one. They both have gate crashed physically as well as verbally in all of my meetings. With time, the tension is de-escalating as they are learning to accept each other and understand that they have an irreplaceable role in my life.